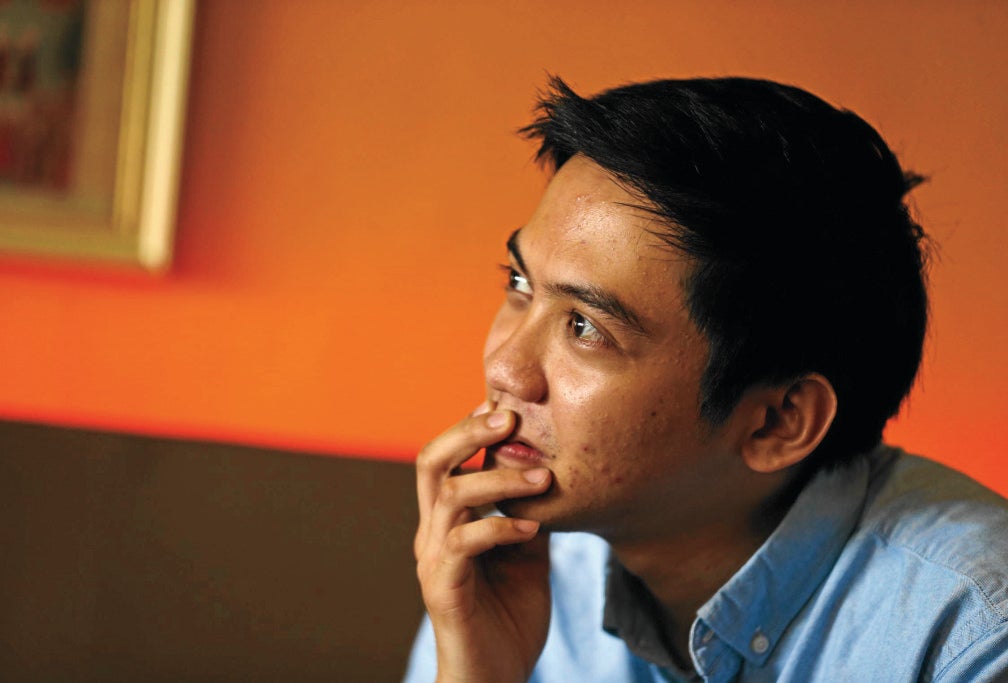 PERFECT SCORE Magno Guidote did not make it to his graduation, but he was no less perfect in four years at the University of Toronto. LYN RILLON

Magno Guidote, 25, missed the June 15 graduation rites at the University of Toronto.

That, however, has not diminished the luster of the Rundle Gold Medal, an award bestowed on him for achieving a perfect 4.0 cumulative grade point average (CGPA) in the bachelor of commerce program at the Rotman School of Management.

With the distinction, he has joined the ranks of Blackberry-Research in Motion cofounder Jim Balsillie and Manulife president and CEO Donald Guloien as distinguished alumni of the Canadian university.

Guidote’s nonattendance at the graduation also did not dampen his enthusiasm to share his achievements and experiences as a Filipino scholar determined to overcome all kinds of challenges.

He was in the country for a monthlong vacation before he began working for a Singapore-based management consulting firm. He said he was spending some time with his family since it had been two years since he last came home.

Guidote and his two siblings were single-handedly raised by mom Angel on a clerk’s salary.  For their early education, he acknowledged the contributions of his mother’s 12 siblings.

Maisie Meneses, an aunt who is a professor at Bicol University, said  it might have been her nephew’s family situation that made him more determined in achieving his goals.

Guidote told the Inquirer he knew early on that education was important. So he took his chances when one of his aunts sent him a newspaper ad of the Singapore Embassy’s call for applications to its Asean (Association of Southeast Asian Nations) Scholarships program in 2007.

At the time he took the exam for the Singapore scholarship, which aims “to provide opportunities to the young people of Asean to develop their potential and equip them with important skills for the 21st century,” he was at the top of his junior high school class at St. Agnes Academy in Legazpi City.

He learned, however, that he was only considered for the scholarship interview because of his excellent command of the English language and his critical thinking skills.  He was told his skills in mathematics were not at par with Singapore’s strict educational standards.

Assuring the grantors that he would work on his math skills if given the opportunity, Guidote received one of the nine full scholarships given to Filipinos at the time.

As soon as he got settled in Singapore, Guidote said he made sure to work on his mathematics. Sure enough, within six months, he was able to catch up with his Singaporean peers, he said, thanks in part to the help extended to him by Filipino senior students at St. Joseph’s Institution (SJI), Singapore’s third oldest school.

Apart from helping him with his studies, his seniors also gave him moral and emotional support, especially when he was sorely missing his family. Guidote said he sometimes cried himself to sleep at night.

“It was really tough. I remember that, for the first six months, I was very homesick,” Guidote said.

His mom, during their long-distance talks, would always remind him: “You wanted this; think of the reason why you wanted this and go back to those reasons.” One of the reasons, he said, was to help ensure a better life for their family.

The strict study habits practiced throughout Singapore that he eventually imbibed, Guidote said, helped him graduate from SJI’s international baccalaureate program as one of the top students.

He also managed to squeeze in some volunteer work with Humanitarian Organization for Migration Economics, a nongovernment organization that trains, shelters and supports abused overseas migrant workers, including Filipinos.

When the time came for him to apply for college admission, Guidote said he thought of aiming for a foreign university education “to seize the opportunity and continue to push myself.”

With a primary goal of finding a full scholarship that would cover all his expenses—since he had no way of funding himself—Guidote applied to various universities in the United States, Canada, Australia and the Middle East.

The first response he received was a letter of rejection from Australia’s Queensland University.

“I was doing really well [up until then] so I was kind of disappointed,” he said, “but at the same time [I was] reminded that life wasn’t going to be always smooth sailing; that there would be setbacks.”

Though now a world away from Singapore’s strict culture, Guidote said he still strove to get good grades because of the extra C$1,000 given to students who achieve a 3.5 GPA. He said  he needed the extra money because of the high cost of living in Canada, adding that he didn’t want his family to send him money.

He said he didn’t expect a perfect GPA of 4.0 in his first year but managed to do it.

The next year, he recalled being warned by one of his advisers that usually students got lower grades in their second year. A 3.5 GPA would be fine, he told himself.

When he got the perfect GPA again in his second year, he began to feel an “internal pressure” to try for a sweep.

In his fourth year, he said, he stopped attending university socials to work harder on his studies.

After his grades for his last two subjects came last month, confirming that he would be graduating with a 4.0 CGPA, Guidote said, he first broke the news to his mom.

“She was so happy she sent out the news via our family Viber group,” said Guidote, who said his mother and the rest of the family served as his guiding light through the years.

He hopes to be able to give back to society for all the opportunities given him—a vision that  his aunt Maisie also shares.  “It is really a priority of mine. I’ve had so many blessings and opportunities. I don’t say this for drama.  It is truly my goal to think of a way in the future to help other children from underprivileged families,” he said.

His advice to students who may think that  a bright future is unachievable because of their economic status?

“Don’t be afraid to dream big,” he said. “But you have to work hard, never lose sight of your goals and use them to inspire you. Be open to failure but at the same time try to always do your best with what you have.”

Have faith, added Guidote, who always made time to pray the rosary two hours before an exam.

Next year, in fulfillment of a promise he made to make up for missing the Toronto graduation rites, Guidote will fly with his mom to Hong Kong to attend the commencement ceremonies at his alma mater’s partner university there.  With reports from Emichaella Añata and Evelyn Cruz/TVJ

Envoy tells PH scholars going to Europe: Study hard but do have fun

How to apply for a foreign scholarship