PNP, AFP to ‘neutralize’ Abus after another Canadian beheaded 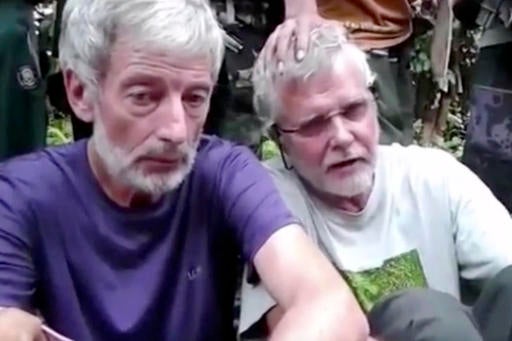 This file image made from undated militant video, shows Canadians Robert Hall, left, and John Ridsdel, right. Police found a severed head in the southern Philippines on Monday, June 13, 2016, and are examining whether it belonged to Canadian hostage Robert Hall, who is believed to have been beheaded by Abu Sayyaf militants after a ransom deadline passed, officials said. Ridsdel was beheaded in April. Militant Video via AP Video, File

The Philippine National Police (PNP), along with the military, assured that it would do its best to neutralize the members of the “evil” Islamic extremist group who beheaded another Canadian national, Robert Hall, on Monday.

“The PNP and AFP (Armed Forces of the Philippines) assure that its officers are doing its best to eliminate such evil doing through intensive military and law enforcement operations that are underway to neutralize these lawless elements and thwart further threats to peace and security,” PNP spokesperson Chief Supt. Wilben Mayor said in a statement on Tuesday.

“This type of execution by evil groups of innocent people is very unfortunate and deserves the condemnation of civil society and every peace-loving citizens,” he said.

The PNP condemned in the strongest terms the beheading of Hall, who was executed by members of the Abu Sayyaf Group after the 3 p.m. deadline they set for a P600 million ransom lapsed on Monday.

Some five hours after, police found a severed head of a Caucasian man near a church in Jolo town, Sulu province.

The PNP also expressed their condolences to Hall’s family and asked the media not to “highlight the unlawful activity” in respect to the victim’s family and countrymen.

“Further, may I appeal to the members of the media to respect the mourning of the family and let us not highlight such kind of unlawful activity that might add to the sorrow of the bereaved family and his countrymen,” he said. RAM/rga