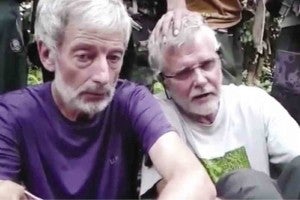 A head believed to belong to Robert Hall (left), whom the  Abu Sayyaf had claimed to have beheaded at 3 p.m. on June 13, 2016, was found in Jolo, Sulu, on the same day.  Beside him in the photo was John Ridsdel, who was beheaded by the the same group weeks ago.  MILITANT VIDEO VIA AP VIDEO

ZAMBOANGA CITY – A decapitated head was found in Jolo, Sulu, on Monday night, more than five hours after the Abu Sayyaf claimed it beheaded one of its captives—Canadian Robert Hall.

Superintendent Junpikar Sittin, the chief of police of Jolo, said the head, placed inside a plastic bag, was recovered around 9 p.m. along Sanchez Street beside the Carmelite Cathedral in Jolo.

“Initially, our personnel thought it was an explosive, but when the Soco (Scene of the Crime Operatives) team inspected the plastic bag, it turned out that it’s a head of an old Caucasian man,” Sittin told the Philippine Daily Inquirer by phone.

“I cannot say outrightly if it belongs to Hall, but based on description, it fits the description,” he said.  SFM