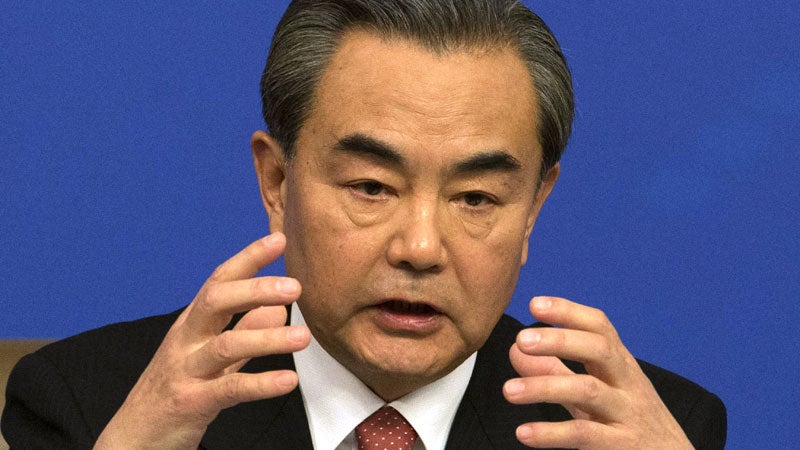 YUXI, China — Continuing Beijing’s push to ease concerns about its assertions of sovereignty over the South China Sea, China’s foreign minister told his Southeast Asian counterparts Tuesday that both sides should take a “long-term perspective” as they try to solve their disputes.

Wang Yi’s comments underscore China’s desire to contain damage to its reputation over its assertive tactics in the highly strategic and resource-rich waterway. Four of the 10 members of the Association of Southeast Asian Nations have claims to South China Sea islands and reefs that overlap with China’s own.

“We should review our relationship with strategic height and long-term perspective,” Wang told the foreign ministers gathered in the southern city of Yuxi, in China’s Yunnan province, which borders on Asean members Myanmar, Laos and Vietnam.

“We should keep on expanding our consensus and cooperation and properly handle and control our differences,” Wang said. “We should jointly lead and push forward the China-Asean relationship toward a healthy and stable development.”

Among Asean members, Vietnam has strongly protested China’s placing of an exploratory oil and gas drilling rig in disputed waters, while the Philippines has brought a case before a UN arbitration panel challenging China’s claim to virtually the entire South China Sea, including artificial islands it has constructed from coral reefs. Asean members Brunei and Malaysia also claim territory there, while Indonesia’s exclusive economic zone overlaps with Chinese maritime claims.

Fishing craft and law enforcement ships from all sides have clashed on occasion, although China has taken pains to avoid escalating such conflicts by intervening with its powerful navy.

China has refused to cooperate with the UN arbitration panel and says it will ignore any ruling it makes, although Chinese and foreign analysts say Beijing’s desire to be regarded as a trusted member of the rules-based international community will likely suffer as a result.

In remarks Monday night at a welcoming banquet ahead of Tuesday’s meeting, Wang said that a quarter-century after establishing their dialogue partnership, China and Asean should “cherish the peace in this region that was not easily obtained and not allow any force to disturb the tranquility of our common home,” the Foreign Ministry said on its website.

Underdog Dasmariñas vows to fight to the death vs Inoue