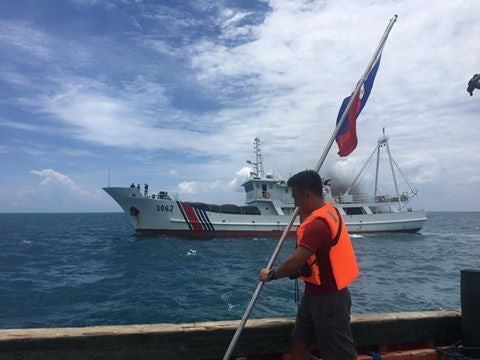 The group of 15 Filipinos and one American sailed to the shoal from Zambales on Saturday afternoon and arrived Sunday morning using a fishing boat.

They wanted to protest China’s claims over the shoal, said lawyer Joy-Ban-eg, co-convenor of the group of Kalayaan Atin Ito.

Kalayaan Atin Ito was the same group that sailed to Pag-asa Island (Thitu) in the South China Sea in December last year.

The plans of Faeldon did not push through after President Benigno Aquino III told him to abort his plans because of ongoing negotiations.

When they arrived at the shoal at about 7:30 a.m. on Sunday, Chinese vessels — two speedboats and three Coast Guard ships — tried to stop them.

By 11 a.m., five of the members, including Ban-eg, decided to swim to reach the entrance of the lagoon, where the planned to raise the Philippine flag. The Chinese kept stopping them.

They were not able to raise the Philippine flag in the lagoon as planned but two of the members were able to reach the entrance and wave a flaglet.

By noontime, the group decided to return to the mainland. Chinese Coast Guard escorted them out of the shoal.

“They made sure na hindi kami babalik,” Ban-eg said. The group arrived in Masinloc early Monday.

Scarborough is 124 nautical miles off the coast off Zambales, well within the 200-nautical mile exclusive economic zone. It has been a site of a standoff between the Philippines and China in 2012.

The Philippines is pursuing a case to challenge China’s aggressive claims to most of the South China Sea and is anticipating a decision from the arbitration tribunal in The Hague. 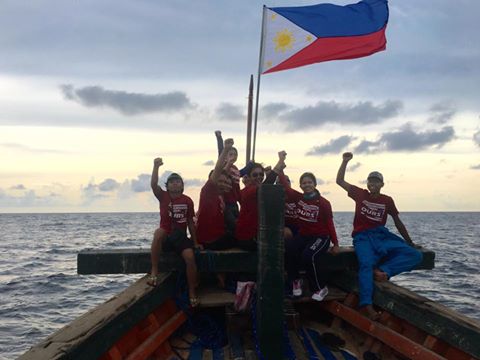 Members of the group Kalayaan Atin Ito raise their fists as they sail to Panatag Shoal to protest China’s occupation of the marine feature that was well within the Philippines Exclusive Economic Zone and has been part of the country since Spanish times. KALAYAAN ATIN ITO FACEBOOK PAGE