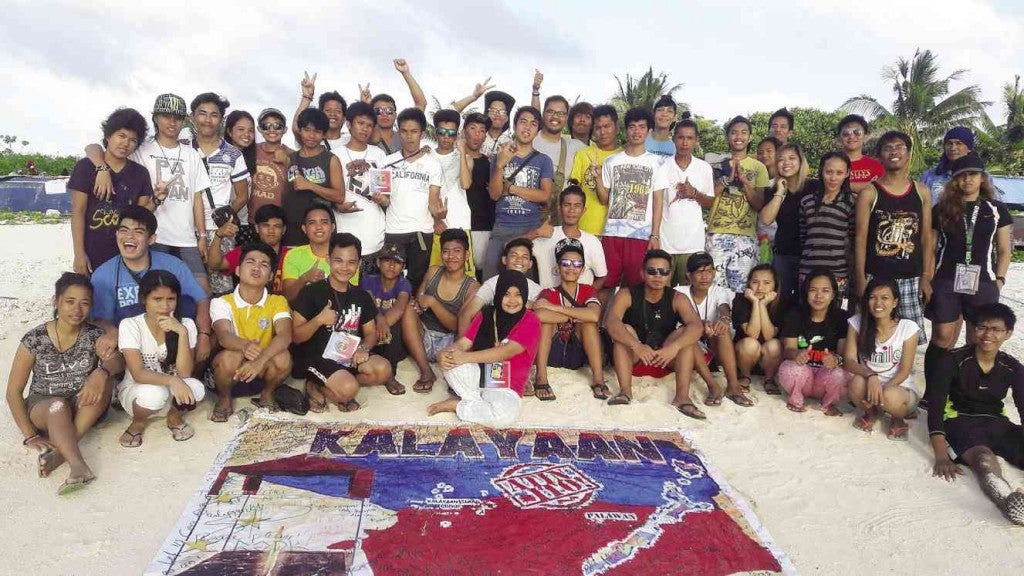 A group of young Filipinos is camping on remote Pagasa Island (Thitu Island), in the Spratly archipelago, in a symbolic stand against China’s claim to almost the entire South China Sea.

Organizers of the group, calling itself Kalayaan Atin Ito (Kalayaan This Is Ours), said 47 of them arrived on Pagasa on Saturday.

“Kalayaan,” the Filipino word for “freedom,” is also the name of the town established by the Philippines in the Spratlys to assert its claim to part of the archipelago within the country’s exclusive economic zone, waters known to Filipinos as West Philippine Sea.

“We recognize the patriotism of these youths that made them venture out,” Coloma said on state-run radio dzRB.

Coloma said the government would monitor the group and give it assistance if necessary.

But he also reiterated that the youths should seek “alternative ways” to show their support, expressing concern for their safety in traveling 500 kilometers from Palawan to Pagasa.

“We hope and pray for their safe journey,” Coloma said.

The youth group left for Pagasa on Thursday despite warnings from the military and Palawan officials.

Joy Ban-eg, coordinator for the group, told Agence France-Presse (AFP) the 47 men and women arrived on Pagasa on a chartered launch on Saturday and would depart Monday.

Photographs and messages from the group posted on their website showed the youths posing on a beach.

A message on a Facebook page also urged President Aquino to “inform the people correctly without sugar coating the truth about Chinese invasion of our exclusive economic zone.”

Members of the group had previously accused the government of not doing enough to stand up to China, which seized seven reefs in the Spratlys and built artificial islands on them to bolster its claim to 90 percent of the 3.5-million-square-kilometer South China Sea, including waters close to the shores of its smaller neighbors in the region.

Besides the Philippines, Brunei, Malaysia and Vietnam have overlapping claims in the South China Sea.

Taiwan is a sixth claimant to territory in the waterway crisscrossed by vital sea-lanes where $5 trillion in global trade passes every year. In the Spratlys islands, reefs and atolls are believed to be sitting atop vast energy reserves.

Recent satellite images showed the Chinese were building ports for seagoing vessels and airstrips long enough to land military planes on at least two of the reefs.

China has also built lighthouses on Calderon and Mabini reefs.

Without military muscle to defend its claim in the South China Sea, the Philippines has taken the dispute to the United Nations Permanent Court of Arbitration in The Hague for resolution.

But China has refused to take part in the arbitration, and said it will not recognize any ruling by the court.

The court, however, has proceeded to hear the case and is expected to hand down a ruling by June next year.

Ban-eg said China had not attempted to block the youth group from reaching Pagasa, adding the members would consult the local residents and the military detachment on the island.

She stressed that the group’s voyage itself was an act of defiance against China’s claim to almost the entire South China Sea.

There was no immediate reaction from Beijing, which had warned it would take over next Ayungin Shoal (Second Thomas Shoal), where the Philippines maintains a small Marine garrison aboard a rusting former hospital ship, the BRP Sierra Madre, which it grounded on the reef in 1999 to mark its territory in the Spratlys. With a report from AFP

Youth protesters not barred from sailing to Kalayaan, but…