Illinois Wesleyan U students to work with PH institutions 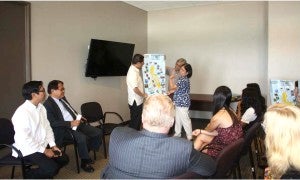 Dr. Teodora Amoloza, a Filipino American professor at IWU and director of the 2016 IWU-Freeman Program explains some places of interest to students who will be interning in Philippine institutions. CONTRIBUTED

CHICAGO — A group of undergraduate students of Illinois Wesleyan University (IWU), Bloomington, Illinois, who will be visiting the Philippines to serve in various communities paid a courtesy call on Consul General Generoso D.G. Calonge on June 2 and received a briefing from him.

The students will travel under the 2016 Freeman Asia Internship Program (FAIP) from June 10 to August 6 to work with the Food and Nutrition Research Institute (FNRI) in Taguig City, Gawad Kalinga (GK) Enchanted Farm in Angat, Bulacan and the International Rice Research Institute (IRRI) in Los Baňos, Laguna.

Dr. Jonathan Green, provost and dean of the faculty, and Dr. Teodora Amoloza, a Filipino-American professor of sociology and director of the FAIP, accompanied and introduced the students to the consul.

According to Amoloza, the Freeman Foundation, which aims to strengthen friendship between the U.S. and East Asian countries, increased its grant to accommodate more students this year, from the original 10 last year to 18. 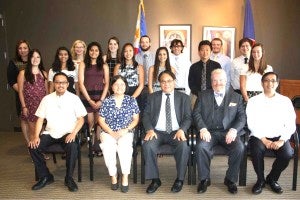 Thirteen interns from Illinois Wesleyan University who are bound for the Philippines join Cultural Officer Liezel Alcantara and (seated from left to right) Consul Abejuela, Dr. Teodora “Teddy” Amoloza, Consul General Calonge, Dr. Jonathan Green and DCG Israel in a photo opportunity at the end of their courtesy call at the Philippine Consulate General in Chicago. CONTRIBUTED

Consul General Calonge presented a summary of the history of the Philippines and offered some suggestions on sites to visit and the usual precautionary tips when traveling to big cities.

In addition, a short promotional video about the Philippines was played and brochures were distributed to the students. Calonge met with the students together with Deputy Consul General Romulo Victor Israel Jr., Consul Ricarte Abejuela III and Cultural Officer Liezel Alcantara, who congratulated the students for being selected for the internship program.

Dr. Green thanked the consulate officials for the briefing and pledged IWU’s continued cooperation with Philippine educational institutions. While faculty members and university officials are not covered by the program, he noted that one percent of their student population will be in the Philippines this summer.