14 to get scholarships from Maui Filipino Chamber of Commerce 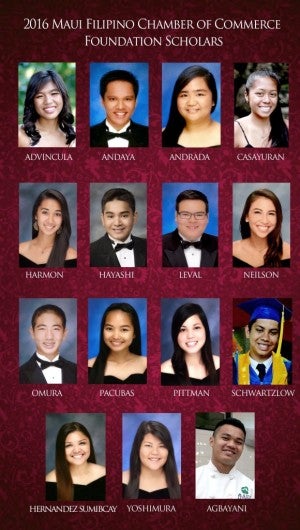 MAUI, Hawaii — Scholarships of $1,000 each will be awarded to 14 graduating high school seniors and one student currently enrolled at the University of Hawaii Maui College’s Culinary Arts Program, the Maui Filipino Chamber of Commerce Foundation has announced.

“The scholars are all outstanding, having excelled academically and in extra-curricular community activities,” says Kit Zulueta, president of the foundation. “We thank our partners and those who helped us raise funds from our golf tournament last month for allowing this to happen.”

The scholarships will be officially presented at the Maui Filipino Chamber’s annual Gintong Pamana Leadership & Scholarship Awards Ceremony on June 16, 2016 at the Maui Beach Hotel beginning at 5:30 pm. For more details on the event, send an email to: [email protected]