OFWs in Baghdad told to be alert amid terrorist attacks 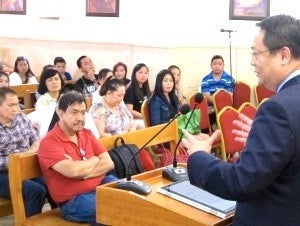 Philippine Embassy Chargé d’Affaires Elmer G. Cato and OFWs at a previous briefing on the situation in Iraq. INQUIRER FILE

BAGHDAD—The Philippine Embassy today reminded Filipinos in Iraq to remain vigilant after a wave of terrorist bombings shook Baghdad and left almost 100 people dead and many more wounded in just a span of 48 hours.

In an advisory, the Embassy urged the close to 300 Filipinos working in the Iraqi capital to exercise caution and limit their movement following the deadly explosions that were claimed by the Islamic State.

On Wednesday, terrorists carried out attacks in at least four locations in Baghdad, the deadliest of which was in the Shia enclave of Sadr City where a powerful car bomb took out more than 60 civilians and wounded 87 others.

On Thursday, two suicide bombers detonated themselves at a police station in Abu Ghraib, killing five officers and wounded 12 others.

“Fortunately, there were no Filipinos among the dead or wounded in the latest attacks but just the same we would like to underscore the need for our kababayan in Iraq to remain vigilant,” Chargé d’Affaires Elmer G. Cato said.

The Embassy also called on Filipinos to avoid demonstrations and other public gatherings as these could also be targeted by extremists.

Cato also urged those among the 2,000 Filipinos working in Iraq who still have not registered to provide their contact details to the Embassy so that they could easily be reached in case of emergency.

The Embassy said it is also ready to repatriate Filipinos in Baghdad and other parts of Iraq who want to return home due to security concerns.

More than 50 Filipinos have been repatriated since the Philippine government placed Iraq under Alert Level IV in 2014 after the Islamic State captured large parts of the country.

The Embassy also said that the temporary freeze in the processing and deployment of new workers to Iraq remains in place and that only Filipinos with existing job contracts in the Kurdistan region can be allowed to travel to the Philippines and return to their jobs in Iraq.