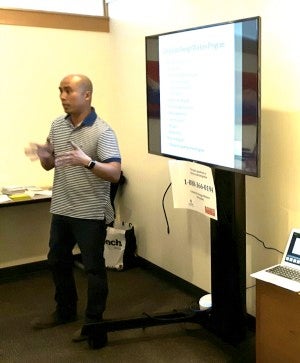 RED DEER, Alberta – As the wildfire continues to move away from Fort McMurray and closer to provincial boundaries, the plight of those affected, including migrant workers, remains up in the air.

On Monday night, some 100 Filipino contract workers searched for answers in an emergency meeting held in Edmonton City, Alberta, and appealed to the Canadian government to help affected temporary foreign workers maintain their status by providing them with open work permits.

“These migrant workers need open work permits or temporary resident permits immediately so that they can start looking for work and get back on their feet,” said Marco Luciano with Coalition for Migrant Worker Rights Canada (CMWRC).

“They have taken huge loans to come work in Canada, they have families to feed just like everyone else, and they need their hands untied so they can get back to work,” he said.

Calgary Consul General Julius Torres in an email to INQUIRER.net said he has asked the Philippine Embassy in Ottawa to coordinate with Canada’s labor ministry to look into opportunities for displaced TFWs who could not yet return to Fort McMurray find alternative jobs.

Luciano also fears that many displaced workers including Filipino TFWs may not be eligible to receive employment insurance (EI), a social assistance fund for workers who are unemployed or those who lost their jobs.

CMWRC has asked the federal government to let loose of the rules surrounding the required 630 hours worked in the last 52 weeks before approving EI benefits. Current labor rules allow for assistance fund up to 55 percent base rate of a worker’s weekly earnings.

Luciano noted workers could be denied EI benefits because Fort McMurray was particularly hit by the downturn in the oil industry in recent years.

He said the ripple effect in the fast food and lodging industries has been cutbacks on their hours worked not just among temporary foreign workers but also locals.

“Migrant workers face an additional burden however, which requires immediate action. Under the current broken system, migrant workers can only work for one employer at the one location that is listed on their permits. They are effectively tied to a single workplace, and now likely that workplace has been destroyed by fire,” added Luciano.

The Consulate has said approximately 2,500 Filipinos have been affected by the mandatory evacuation in Fort McMurray.  The Consulate is still trying to get a more accurate figure through Filipino community contacts. Community leaders earlier reported some 8,000 Filipinos belonged to the thousands forced to leave.

“Noting the special needs of Filipino TFW evacuees, especially those who have lost their Philippine documents, the Consulate has waived all fees for Fort McMurray Filipinos when they avail of consular services such as affidavits and NBI forms,” Torres said.

The consulate has asked its counterpart in Vancouver for an urgent passport outreach in northern Alberta for TFWs who may need their passports replaced. “These Filipinos will also be able to avail of reduced passporting fees,” Torres added.

Meanwhile, the Government of Alberta has started doling out the emergency fund it allocated for the victims of the massive wildfire.

On Wednesday, affected residents began lining up to receive the C$1,250 assistance fund for each adult, and $500 for each dependent, in the form of debit cards in four designated areas around the province. The government has added a fifth distribution center on Thursday.

The emergency money, totaling $100,000 million, will be distributed from May 11 to 20 in five designated centers. The government said more than 90,000 residents were forced to evacuate last week.

“I know this has been a stressful time for many Albertans, and while some evacuees have family supports to fall back on, others do not. Lineups at the card distribution centres will be long,” said Premier Notley.

For its part, the Canadian Red Cross has announced it will soon give out C$600 and $300 for each adult and child respectively, from the collected emergency assistance fund totaling $67 million.

The blaze spared 90 percent of Fort McMurray, Premier Rachel Notley had announced on Tuesday. A brief drizzle dampened the wildfire on Monday but the forest fire has ravaged approximately 241,000 hectares so far. The blaze is now only 13 km. away from the nearby province of Saskatchewan.

Re-entry plans are underway with the government stating residents could expect to return to their communities within two weeks.