Filipinos in fire-stricken Canadian province may have to go home 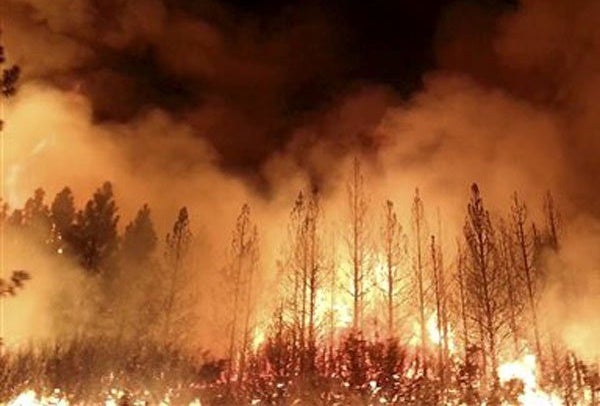 The dreams of many migrant workers, including Filipinos, are going up in smoke in the fire that has been raging in Fort McMurray, Alberta, Canada. The devastating wildfire has destroyed businesses that employ the migrants, who may have to go back home. AP FILE

FORT MCMURRAY, Canada — Jonathan Infante fled for his life from wildfires ravaging Canada’s remote Athabasca oil-producing region, and now he and other migrant workers face the grim prospect of having to altogether leave Canada.

Their residency here is tied to their employment and if that is now gone — literally up in smoke — they could be forced to leave this country.

The wildfires in northern Alberta have forced the evacuation of 100,000 people.

Among the evacuees were almost two dozen distraught migrant workers who arrived late Friday at a government shelter in Edmonton, Alberta’s capital.

Marco Luciano of the migrant advocacy group Coalition for Migrant Worker Rights in Canada, who was on hand to greet them, said many showed up in their work uniforms.

“They had been evacuated from work and did not have time to stop at home to pick up any of their clothes or belongings,” Luciano told AFP.

“They’re not sure what’s coming… Because they no longer have work, their (residency) status has become precarious.”

“Many are bracing for the worst,” he said.

Infante’s wages support a wife and two children back in the Philippines, where many of the migrant workers come from.

The Wendy’s fast food restaurant in Fort McMurray where he worked is believed to have survived the wildfires, so far.

“Our employer told us to wait and see,” Infante said outside an evacuation center in Lac La Biche, about 300 kilometers (185 miles) south of Fort McMurray.

According to Luciano’s group, there are about 70,000 temporary foreign workers accredited in Alberta. There’s no breakdown available of how many were displaced by the fires.

Fort McMurray has been a popular destination for foreign workers over the past decade.

Many work in restaurants or lodges and provide childcare — relatively lower-paying jobs in the oil-producing region where employers say it is hard to recruit local staff.

The service industry in particular lobbied hard to ease the rules for temporary foreign workers in order to allow more into Alberta during its boom years when oil prices were higher.

Luciano said they are facing more challenges than Canadian citizens in finding temporary accommodations until the fire situation comes under control as few have family or friends nearby who can take them in.

Many also lost their documents in the fires, and have meager savings they can tap into over the short term.

Canadian immigration officials are looking into the situation to see if exceptions could be made that would allow them to stay in Canada.

Egdon Parra, who is acquainted with several migrant workers in Fort McMurray, said he hopes they will receive special consideration from Ottawa.

“It would be a calamity if they were asked to leave Canada,” he said.

Parra said the workers need time to recover from the trauma of recent days.

“This has been hard for them, for everyone,” he said.

“The government must understand that they are important members of the community, they contribute to the economy and they pay taxes,” Parra added.

“They don’t just work here, they live here too, even if it’s only temporarily.”/rga