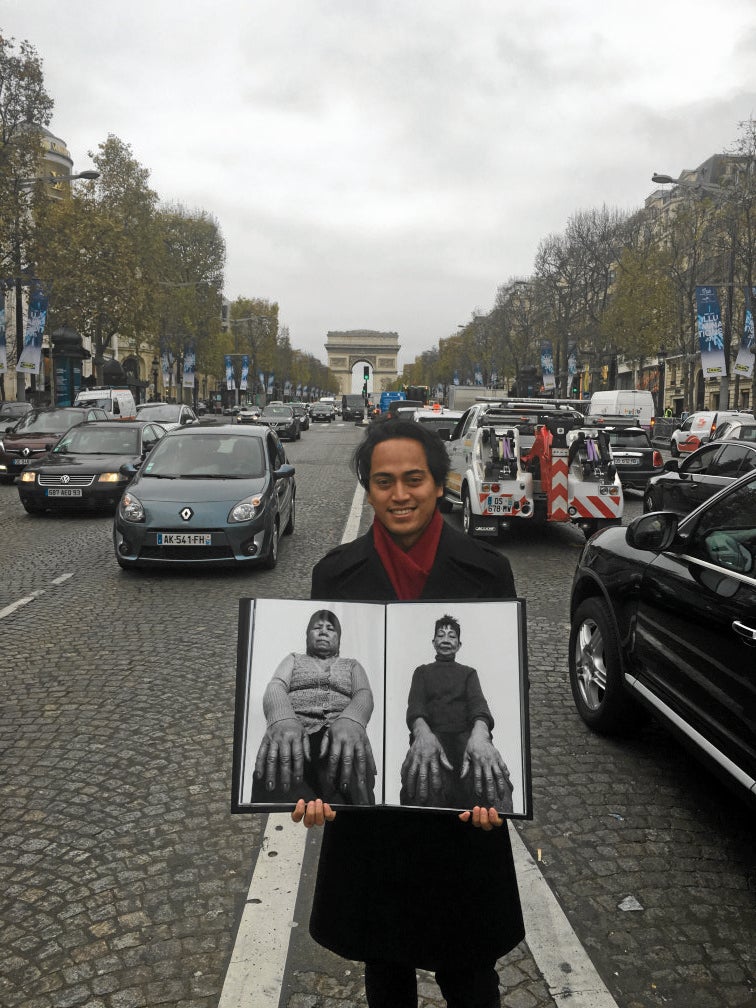 The City of Light has been exceptionally good to Filipino photographer Ryan Arbilo, even if on his first two weeks of living in Paris, he accidentally broke several perfume bottles and figurines in the homes of affluent French families.

“I realized cleaning homes wasn’t for me. I kept breaking things,” said Arbilo, chuckling at the recollection.

Looking dapper in a dark trench coat, Arbilo met with the Inquirer on a chilly December morning last year to talk about his exhibit at Maison Européenne de la Photographie (MEP) in September.

He was then in the thick of preparations for the show, presumably the first mounted by a Filipino photographer at the renowned Parisian museum.

“I’m really proud to represent the Philippines in Paris,” Arbilo said, adding that it was his ultimate dream to see his country of birth recognized in this part of the world.

Titled “Chicken Hands,” the photo exhibit is a testament to the hard work of Filipino domestic helpers, women and mothers who have been working in Paris for decades.

“I am honoring my mother and all other Filipino mothers working here with my exhibit,” said Arbilo, adding that he was inspired by folk singer Freddie Aguilar’s song, “Isang Kahig, Isang Tuka.”

“Here in Paris, Filipinos use their hands—literally—to earn money, and it made their hands look like chicken feet,” Arbilo said, explaining his work’s focus on gnarled hands with their dry, wrinkly skin.

It was 2012 when Arbilo tried his luck with MEP. He just walked into the museum and asked to see MEP director, Jean-Luc Monterosso, to whom he showed some of the black-and-white photos he had taken.  “Would he be interested in such work?” he asked.

“Jean-Luc got the idea right away when I explained my work, especially its sociopolitical commentary. And no one had ever done photographs like these. He said they were unique,” the Filipino photographer said.

Arbilo was able to complete 25 photographs by the time he met the Inquirer last year.

His mother, Magdalena, is his main inspiration for the project, Arbilo said. Her job as a domestic helper in Paris for over two decades helped him and his three siblings pull through life in their hometown in Calauan, Laguna, he added.

Arbilo, who worked as an assistant in one of Manila’s upscale salons, followed his mother in Paris in 2007, along with two younger siblings. In 2009, he began taking photographs of his mother’s friends, who soon became his own friends.

He sat them in his small studio and had them place their hands on their knees. The photographs are in black and white which, he said, gives a stronger, more emotional effect.

While some of the women gamely joined his project, Arbilo said others were hesitant. Most of them were not comfortable with the idea of showing the gnarled hands of a domestic worker.

Arbilo said he was disappointed when they turned him down but that he would explain to them what the photograph was all about. “It was only when they understood the reason I was doing this that I took their pictures,” he said of the process behind the project that took a while to complete.

Arbilo never realized he had a talent for the arts until he discovered he had butterfingers as a housekeeper, but could hold steady a camera and train its lens on subjects that come out as beautiful compositions.  He started tinkering with a basic digital camera and later got himself a DSLR (digital single-lens reflex) camera. Soon he was clicking away.

Inspiration for Arbilo comes in many forms and from different sources—some from simply walking down the streets of Paris or spending time absorbing the artworks in the city’s museums.

Friends saw talent in his work. Soon enough, Arbilo was asked to take photos at weddings, birthdays and baptisms, as well as shoot for food catalogues. He also worked on fashion shoots, which earned him decent money.

As word got around about the talent of this Filipino photographer, Arbilo found himself at the Cannes Film Festival on the invitation of French independent film producers. Yes, he has photographed the world’s biggest and most beautiful celebrities.

Arbilo also does sketches. In 2014, the Filipino community in Paris asked him to make a portrait of President Aquino, as their gift to the President during his visit to the French capital. Unfortunately, he was not able to meet Mr. Aquino himself.

But all these other projects did not distract Arbilo from his “Chicken Hands” exhibit, more so when the years and the seasons started exacting their toll on his subjects.

Arbilo said one of his models, Aida, lost two of her fingernails a year after he photographed her “because it was too cold, and she had been working hard for years.” Aida is pushing 75, and has lived in Paris for over 30 years.

Recently, the photographer had another addition to his exhibit: his mother.

While working on his project, Arbilo and his siblings learned that their mother had breast cancer and had to go through chemotherapy and radiation treatments. The treatments made her lose her hair.

“She didn’t want to be photographed while she was bald,” Arbilo said.

Two weeks ago, an excited Arbilo updated the Inquirer about “Chicken Hands.” His mother, he said, would finally be part of the exhibit.

“She survived the cancer,” he wrote. “She had her final treatment in March.”

Now the mother was ready to have her son take her picture.

No free ride to Paris for disabled artists