Presidential campaign in PH just like in U.S.–the ‘D’ word 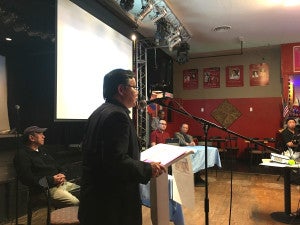 Philippine American Press Club held a presidential forum April 16, 2016 in South San Francisco, California. A total of 263, 316 overseas Filipinos in the U.S. are eligible to vote, according to the Philippine Consulate; 46,583 are registered to vote in the eight-state San Francisco region. Turnout has been as high as 30 percent in 2010, and 14 percent in 2013. EMIL GUILLERMO

Did you vote? Are you a dual? Or just dueling?

By time you read this the Philippines presidential election may very well be over.

But the problems won’t be.

Call it the leverage of Philippine semocracy, where so little can control so much.

As I write this in the U.S. the pre-election polls predict no one will have more than 33 percent.

A lot of people who don’t want Duterte.

Majority rule? Not in the Philippines.

Maybe that’s why Duterte likes to use force–as his insurance policy.

Of course, the last one to win a majority was Ferdinand Marcos in 1986, with more than 53 percent of the vote.

But who knows how many dead people voted in that one.

It’s ironic that the last one to have a majority was a dictator.

And just wait, we may be there again.

In the final hours before the vote, the D word has been mentioned again and again.

Only this time it was targeted at the front-runner Duterte. Which makes him double-D dangerous.

He’ll say anything, and play to the crowd.

Sound like someone you know? Maybe another D guy, Donald Trump.

Or make that Donald Drumpf, the original name before the Donald’s grandparents anglicized it.

In many ways Drumpf and Duterte are political doppelgangers.

Drumpf wants to wall off the country and protect it from immigrants. Duterte just wants to go after the bad guys, but for real.

People don’t seem to care much about Duterte’s connection to so called “death squads.”

It’s similar to the way a certain part of America doesn’t bristle when Trump says harsh things about undocumented Mexicans and others, including Muslims.

In fact, I got to experience the “Duterte as the Donald” phenomenon last month in South San Francisco at the Philippine American Press Club forum.

The D fans were loud and boisterous.

When Ted Laguatan, a Mar Roxas supporter, spoke at the forum, he said the election was all about the economy and that Duterte was bad for the Philippine economy.

He was greeted with jeers from red-T shirted Dutertites like Reynaldo “Bong” Aralar, 52, who immigrated to the U.S. 20 years ago, and votes in America and in the Philippines.

He’s one of the 263,316 dual citizens in the U.S.; 46,583 are eligible to vote in the eight-state San Francisco region, according to the Consul General’s office.

Aralar is just ready for a change.

Aralar works in a county government position in San Jose. He said he’d be willing to go back to the Philippines to live someday, especially if Duterte wins. He doesn’t believe what anyone says about Duterte’s human rights violations. Aralar only believes that the old politics haven’t worked for all the people.

“He’s the best one, the only one who can effect change,” Aralar said.

That’s the theme: What’s best for the Philippines. But no one has the answer.

“Duterte has no qualms and no morals, no understanding of right and wrong as we know it, “ Lewis told me. “To effectively enforce his views, he has to enforce martial law. He would be worse than President Marcos, who had no respect for the rule of law.”

Mere mention of Marcos is a reminder to many of some of the darkest moments in the history of democracy in the Philippine.

Is that the future we have to look forward to?

Lewis believes a Duterte victory “would be a tragedy for U.S.-Philippine relations because Duterte would be persona non grata and would be denied entry into the USA due to his human rights violations.”

As I write, the final votes have yet to be counted. Relatives have texted me their concern. “We still have family there,” one told me wary of what the new chapter of Philippine democracy will bring.

Let’s hope for clean and honest, trouble free elections, where choices are made for the greater good of all.

Because wherever you are, the Philippines is still our hearts, where the hope never dies.

Emil Guillermo is a journalist and commentator who writes from California. Contact: http://www.twitter.com/emilamok