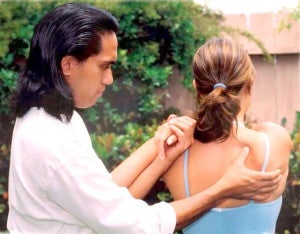 Apostol learned “ablon” (hilot in Tagalog) from his grandmother who lived with his family as he was growing up. His grandmother used oil and liniment. She learned healing and midwifery from her father in Laoag, Ilocos Norte in the Philippines.

“I would assist my grandmother when she provided ‘ablon’ to her ‘patients’ who were mostly immigrant Filipinos. I realized that it was a part of our culture as Filipinos,” Apostol recalls.

Virgil was born to Anselma Mayor and Vidal Apostol, a sakada recruited to work in Hawaii plantations in the 1930’s. 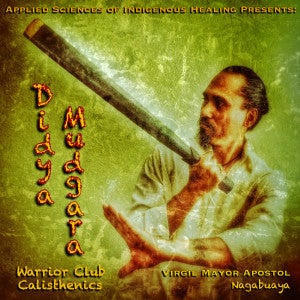 The elder Apostol from Laoag, was only 17 years old when he was recruited by the Hawaiian Sugar Planters Association. Still young and full of adventurism, he braved a new life in Hawaii. Later, he went back to the Philippines to marry Anselma. Virgil’s oldest sister was born in Laoag. In 1958 the family went back to Hawaii where his older brother was born.

“My parents decided to relocate to Los Angeles where I was born. My father studied and became a nurse. Out of the three of us siblings, I am the only one who speaks Iluko and Tagalog,” Apostol explains.

Apostol recalls that the early immigrants in America raised their children in “American ways” to conform to their new life. Various cultural aspects were not taught, especially the languages, Tagalog and Ilocano.

As a teenager in California, Apostol’s friends included not only other Fil-Ams, but also Guamanians, Samoans, black Americans, Mexicans and Caucasians. His parents felt that his friends had a bad influence on him and sent him back to Hawaii.

There he was surrounded by Ilocano-speaking relatives, some of whom had just arrived from the Philippines. It became the turning point in his life as he was exposed to a deeper sense of culture.

Although Apostol has a degree business administration at National University, he continued his education at the Academy of Health Professions University of Metaphysics where he finished with a degree in Metaphysical Science to become a holistic health practitioner.

The Apostols were brought up as Seventh Day Adventists, and folk practices such as the ones from the Philippines were discouraged as these were believed to be “backward” or the “work of the devil.” Communication with ancestral spirits was also seen as communicating with Satan disguised as an ancestor.

Apostol remembers that he once administered ablon healing to an older Filipina. During the session, he applied “blowing” to the body. He also had bottle of oil which contained various roots and anib (amulet). Afterwards, the same woman spread rumors that he was practicing the work of the devil.

Apostol’s interest in culture began in earnest when he read Dan Inosanto’s book “Filipino Martial Arts,” which became his “bible.” The book contains stories of master practitioners and as well as history.

Driven by his interest to learn about his culture he went to meet Apo Whang-od, the oldest and the famous mambabatok or tattoo artist in Kalinga in 2010.

Married twice to Filipina women and divorced, Apostol has four kids ages 12 to 27. He is now in a relationship with a woman of Ethiopian-Native American descent.

‘I would like my children to embrace our traditional healing methods of ablon and other adjunct healing practices that have been passed down through my maternal and paternal lines of indigenous healers,” he says. “They could learn about the culture, but with poor health, everything learned will not be fully expressed,”

Apostol has authored two books, “Way of the Ancient Healer: Sacred Teachings from the Philippine Ancestral Traditions” and an older co-authored work, “Healing Hands of Hilot.” Both are available in the U.S. and online bookstores.

As a martial arts practitioner, he teaches students in the art of Didya Mudgara warrior club calisthenics, which is based on Ilokano Escrima (fencing) and wooden club swinging practices from India. He also gives talks and conduct seminars. 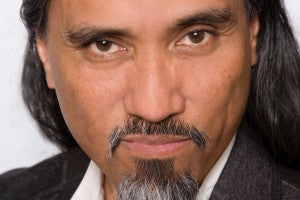 Virgil Mayor Apostol says, “Culture provides us a sense of power and direction.”

“Promoting our cultural roots, gives us a sense of power and direction. It provides us with a way of expressing our being through the different aspects of the culture, including the various arts, languages, spirituality, cuisine, social interactions. It gives us a way of connecting with members of our family who were born in the homeland,” he explains.

Apostol also believes that Fil-Ams must travel back to their homeland to experience connectedness. He says that honoring and respecting our culture, we also learn to appreciate and respect the culture of others, thus bringing about harmony and opportunity see our own culture in a different light.

“One of the damaging effects of our people, psychologically, socially, culturally, and even spiritually is our ugly history of colonization where our ancestors were forced to give up their traditional ways of life. It is important to embrace who we once were and learn all that we can of our culture so that we can see beyond those ridiculous Filipino TV shows that retard our precious minds, not to mention the continuance of colonization through mass media,” he concludes.