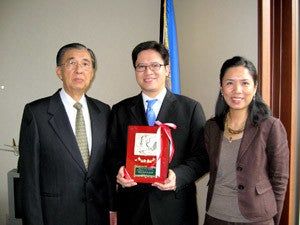 In this 2009 photo, then Philippine Ambassador to Japan Domingo Siazon Jr. (left) poses with then Vice-Consul Christian de Jesus (center) and Consul Maria Anna de Vera of the Cultural Section at the Embassy. (Photo from the website of the Philippine Embassy in Tokyo, Japan, http://tokyo.philembassy.net/)

MANILA — Former foreign affairs secretary Domingo L. Siazon, a career diplomat who had a key role in expanding trade ties with Japan and recalibrating foreign policy to improve the treatment of overseas Filipinos workers (OFWs), passed away Tuesday due to a lingering prostate cancer, an official of the Department of Foreign Affairs (DFA) said.

Foreign affairs undersecretary for international economic relations Laura del Rosario confirmed to the Philippine Daily Inquirer on Wednesday about the sad loss for the DFA.

Malacañang paid tribute to Siazon, saying he was a “cultured, urbane man” who left behind a record of “distinguished service” to the country.

“He brought honor to the flag wherever he served. We extend deepest sympathies to his family at this time of profound loss,” presidential spokesperson Edwin Lacierda said.

“Respected by his colleagues in the foreign service, his peers abroad and by presidents and the public alike, he belonged to the second generation of career diplomats who served with professionalism and who rose according to merit,” Lacierda said.

“He was our Japanese expert and it was during his stewardship that the Japan-Philippines economic partnership was negotiated and eventually signed,” undersecretary Del Rosario told the Inquirer.

Del Rosario said secretary Siazon came at the department at a crucial time when Filipinos were highly emotional about the death of Filipina maid Flor Contemplacion, who was sentenced to death by hanging in Singapore.

“Secretary Siazon came in after the death of Contemplacion and we at the department had to do a lot of recalibrating in foreign policy particularly in handling OFW issues,” said Del Rosario.

He said the leadership of Siazon had an impact on the improvement of treatment of OFWs by the nationals in host countries.  SFM