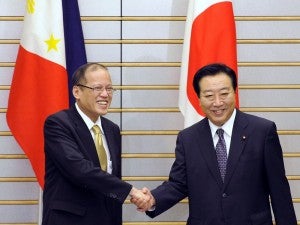 President Benigno Aquino is greeted by Japan Prime Minister Yoshihiko Noda prior to their talks at Noda's official residence in Tokyo Tuesday. AP

The maritime issue in the South China Sea, which Manila calls the West Philippine Sea, ranked high in the agenda of the two leaders’ meeting that sought to elevate their country’s bilateral relations to a more meaningful “strategic partnership.”

In a joint statement, Mr. Aquino and Noda “confirmed that the South China Sea is vital, as it connects the world and the Asia Pacific region, and that peace and stability therein is of common interest to the international community.”

He also emphasized the importance of “a rules-based regime for addressing and resolving disputes and promoting cooperation.”

Following the meeting, the President and Noda “confirmed that freedom of navigation, unimpeded commerce, and compliance with established international law including the UNCLOS and the peaceful settlement of disputes serve the interests of the two countries and the whole region.” UNCLOS refers to the UN Convention on the Law of the Sea.

“They shared the recognition that these same interests should also be advanced and protected in the South China Sea,” according to the statement.

Though not a claimant to the Spratlys islands, Japan came into the picture, saying vessels that deliver oil it imports from the Middle East pass by that vital sea lane.

Japan promised to assist the Philippine Coast Guard so it could better patrol the country’s vast coast line. It will dispatch patrol vessels of the Japan Coast Guard to train its Filipino counterparts. Both countries also agreed to “promote exchanges and cooperation between their defense authorities.”

The two leaders agreed “to continue consultations in order to further improve the current situation, including the smooth dispatch and acceptance of Filipino candidates for qualified nurses and certified workers.”.

The President thanked Japan for agreeing to conduct Japanese language training before nurses are sent to Japan.  He also “emphasized the importance of increasing the passing rates of Filipino nurses in the Japanese National Examination for nurses.”

“We agreed to sustain our active economic cooperation founded on the framework of the JPEPA,” Mr. Aquino said after the meeting. “Our governments will be working closely for its effective implementation and for the success of its first general review this year, so that we can maximize its prospective benefits.”

During his four-day Japan visit, the President travelled to the tsunami-hit Ishinomaki in the north and will meet with Emperor Akihito before returning home on Wednesday.

Before the start of the bilateral meeting at his official residence, Noda expressed his sympathy for the battering the Philippines was getting from Typhoon “Pedring.”

“We hope the threats would be minimized as soon as possible,” Noda told the President.

The two leaders witnessed an exchange of notes on a package of development assistance from Japan, specifically on disaster preparedness and mitigation projects.

Topping the list was a forest management project worth 9.22 billion yen (or P5.87 billion), which was part of the overall official development assistance by Japan to the Philippines.

The President “renewed his appreciation for Japan’s continuous assistance for the climate change mitigation and adaptation measures” in the Philippines and promised the “steady implementation” of other projects made possible by Japan loans.

Earlier, the President offered a “win-win” opportunity for Japanese investors in the Philippines and received pledges of  potential fresh investments worth at least $1.1 billion, according to spokesperson Herminio Coloma.

Coloma said Toyota Motor Corp. alone would invest P3.6 billion, which would create some 5,000 jobs. He said the top car-maker was also looking to put up a $170-million “next generation” manufacturing plant in the Philippines.

Murato Manufacturing Co. Ltd., one of the world’s top producers of digital components, was also planning to establish a factory for its cutting-edge “monolithic ceramic capacitor” in a 23-hectare property in Laguna by October next year.

“This is a good time to invest in the Philippines because this culture of transparency we are cultivasting will lead to a win-win situation for all stakeholders involved,” he told the Japan Chamber of Commerce and Industry during lunch at the Tokyo Kaikan Hotel.

A palpable change, Mr. Aquino said, was the streamlining of business applications, which was part of a larger effort to “eliminate the preponderance of under-the-table transactions with bloated commissions secretly pocketed by corrupt officials.”

Mr. Aquino noted that efforts to review previous government contracts led the Department of Public and Works and Highways to save  P4.652 billion worth of supposedly “questionable projects.”

Critics blamed his cautious approach to public spending to the country’s 3.4-percent economic growth rate in the second quarter this year. A recent Senate budget hearing showed that the DPWH spent only P16 billion out of its P90-billion budget for infrastructure as of last month.

But in his meetings here, the President said it was better to have a problem with “underspending” than to worry about lost money due to corruption. “All our efforts are governed by an overarching principle: an end to corruption means an end to poverty,” he said.