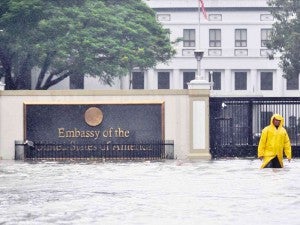 WATERY INVASION A security guard stands in floodwaters in front of the US Embassy gate in Manila on Tuesday. The floodwaters and storm surge brought by Typhoon “Pedring” prompted the US Embassy to suspend work and ask for help to evacuate staff. Special Action Force and other PNP elements come to the rescue. ARNOLD ALMACEN

The hitherto impregnable compound of the US Embassy in Manila was submerged Tuesday in waist-deep water, pushing more than 100 construction workers and employees of the world’s superpower to call for help.

As Pedring pummeled Metro Manila and wide swaths of Luzon, giant waves crashed against the sea wall behind the embassy and reduced a long stretch of Roxas Boulevard to an extension of Manila Bay.

At 9:30 a.m., some 100 men building an extension of the embassy building in the compound and 10 staff members of the diplomatic office sought help to leave.

“It was not really an evacuation. It was more of a conveyance,” Superintendent Rogelio Rosales, the MPD-DPSB head, told the Inquirer.

He said that after the embassy workers were rescued from the compound, they asked to be taken to TM Kalaw Avenue, where they could safely take transportation to their respective homes.

All of the embassy workers had availed themselves of transportation by 11 a.m., but sentries remained posted at the compound’s gates.

“The embassy workers were frightened by the strong waves in Manila Bay and the continuous flooding in the area, so they sought help,” Rosales said.

He said the first responders were personnel of Barangay (village) 667 Zone 72, who brought in a fire truck to help the stranded workers out.

Rosales said that to his recollection, it was the first time the US Embassy was submerged in water and its people needed to be rescued from the compound.

He said such an emergency never took place during the passage of such momentous typhoons as “Ondoy” or “Milenyo.”

“The waves from Manila Bay were just too powerful. The high tide made it worse,” he said in Filipino.

Later in the day, the US Embassy announced that it would be closed to the public Wednesday due to the heavy rains brought by Pedring. It is expected to reopen Thursday.

The embassy said that American citizens in emergency circumstances should call the embassy switchboard (301-2000) for assistance, and that nonimmigrant and immigrant visa appointments for Tuesday and Wednesday would be rescheduled.

All affected applicants will be contacted and told of their new schedules.

The embassy also extended its sympathies to everyone affected by the typhoon.