LAUNCHED IN SPACE: This file photo from the website of the Department of Science and Technology’s Philippine Council for Industry, Energy and Emerging Technology Research and Development, shows the Diwata-1 microsatellite at left and the engineers who helped in building it at right. (Photo taken from the DOST PCIEERD website, pcieerd.dost.gov.ph/news/187-philippines-diwata-microsatellite-rising

MANILA — The long wait is over as the Diwata-1 is finally sent out to space to begin her 20-month-long journey.

Diwata-1, officially named the Philippine Earth Observation Microsatellite, was released into orbit at exactly 7:45 p.m., Wednesday(Manila time), from the Japanese Experiment Module (JEM), nicknamed “Kibo,” where it was housed since it reached the International Space Station on March 26.

The release of Diwata-1 into space was met with much jubilation by the Philippine delegation in Japan, led by Science Undersecretary for Research and Development Amelia Guevarra.

In Manila, cheers enveloped the University of the Philippines’ College of Science Amphitheater, where at least a hundred students, led by the UP Astronomical Society, gathered to watch the live broadcast of Diwata-1’s deployment.

Among those present at the public viewing were UP Diliman Chancellor Michael Tan and Carlos Primo David, executive director of the Philippine Council for Industry, Energy and Emerging Technology Research and Development. 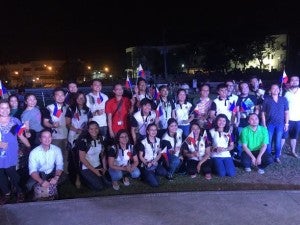 From there, Diwata-1 will be using its four specialized cameras to capture an average of 3,600 high-resolution images of the country that will be used for imaging its land and water resources, and for studying changing weather patterns, agricultural productivity, as well as disaster response and mitigation. The microsatellite is expected to stay in orbit for approximately 20 months.

David said that in the next few days, the public would see the first images of the country taken by Diwata-1.

He said that Diwata-1’s deployment  into space was also a “milestone” for the Japan Aerospace Exploration Agency as it was the first time it deployed a 50-kilogram class satellite from Kibo, paving the way for the future launches of other microsatellites.

“Japan is celebrating with us. Though they have sent many satellites on their own, this is one of their first collaborations. They feel this is something new to them as well, hence they share the pride and the accomplishment we’ve made,” David told the Inquirer.

In the first few weeks of Diwata-1 in space, it will be controlled by engineers at Tohoku University. The DOST official said that within May, control will be transferred to the Philippine Earth Data Resources Observation (Pedro) at UP Diliman.  SFM