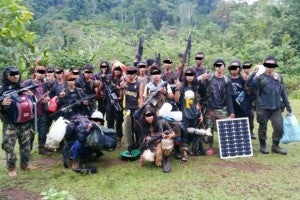 MANILA — The Armed Forces of the Philippines lauded on Wednesday, the service of Brig. General Allan Arrojado, and denied that he was made to give up his command of the operations against the Abu Sayyaf after the group beheaded its captive, Canadian John Ridsdel, on Monday in Sulu.

The AFP announced the replacement of Arrojado, commander of the Philippine Army’s 501st Brigade based in Indakan, Sulu, in the wake of the cold-blooded execution of Ridsdel, who was among those kidnapped by the Abu Sayyaf Group in Samal Island, Davao del Norte in September.

The Philippine army spokesperson, Col. Benjamin Hao, said Arrojado’s next assignment has not been determined by the Army board of senior officers.

In the last 18 months, Arrojado, a member of the Philippine Military Academy (PMA) class of 1984, led the campaign against kidnap-for-ransom groups in Jolo, including the Abu Sayyaf Group, the military said, in its statement.

Too, “Arrojado has served with distinction as brigade commander of the 602nd Brigade and the 501st Brigade for a total period of two years and five months,” said the AFP spokesperson, Brig. Gen. Restituto Padilla.

In an interview with the media, Padilla denied that Arrojado was being blamed for the failed rescue attempt for the Samal Island hostages. The military spokesperson said the replacement was part of regular reshuffling.

“Army officers usually serve a minimum of one year and six months in major positions to complete their billet requirements,” Padilla said.

Reacting to reports that Arrojado had actually resigned due to a “conflict of approach” in the operations against the Abu Sayyaf, Padilla explained that no Army officer, aside from those holding major positions, could resign from posts they got under orders of their superiors. Thus, they could only relinquish their posts upon being relieved by higher officers, Padilla said.

Faustino’s new designation, according to the Army, was part of the organization’s “leadership development program” for senior officers.

Faustino, a member of the PMA class of 1988, previously spent combat duties in Mindanao as operations and intelligence officer of Task Group Zamba under the Army’s elite Scout ranger unit, and as commander of the 35th Infantry Battalion in Patikul, Sulu.

Padilla could not confirm reports that Ridsdel’s body had been recovered.

Initial military reports state that a headless cadaver, believed to be that of a Caucasian, was recovered Wednesday noon at a dried-up creek in Sitio Tibangaw, Barangay Gata in Talipao, Sulu. Ridsdel was believed executed on Monday in Barangay Lower Sinumaan, also in Talipao.  SFM

Read Next
Aquino: Abu Sayyaf also plotted to kidnap Pacquiao, Kris
EDITORS' PICK
Pagasa: Warm, sunny Sunday in most parts of PH
Is it safe to talk politics again at family gatherings? ‘The Reconciliation Dinner’ shows us what that’s like
House energy committee chair Arroyo bats for cheap electricity
EDITORIAL: To a bike-friendly future
The Best Tech Gifts For The 2022 Holidays
vivo’s coming to town to grant wishes with more holiday promos
MOST READ
LOOK: Vhong Navarro transferred to BJMP detention facility in Taguig
The Elephant Man in the Senate
Posh village as ‘shabu’ haven
LOOK: Zanjoe Marudo bonds with Ria Atayde, her family
Don't miss out on the latest news and information.