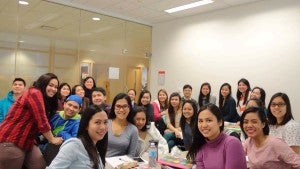 Members of Pinoy IEN at a review session in Toronto, Ontario. The group is questioning why their education is “non-comparable” to Canadian RN education. CONTRIBUTED

RED DEER, Alberta – A support group for Philippine-trained nurses is launching a petition drive to ask nursing governing bodies to recognize Filipinos’ nursing education as comparable to that of Canadian registered nurses.

Calling themselves Pinoy Nurses IEN-NNAS Application for Canadian Registration, members of the group have become frustrated over the hurdles they face during the initial phase of registration conducted by the National Nursing Assessment Service (NNAS), the body launched in 2014 to streamline the registration of internationally educated nurses (IENs) in Canada.

The criticism came on the heels of the three-year plan the NNAS has outlined stressing greater links with provincial nursing regulatory bodies and harmonizing the initial phase of registration process for IENs.

Twenty-one nursing regulatory bodies across the nine provinces except Quebec that govern registered nurses, licensed practical nurses and registered psychiatric nurses are members of the NNAS.

According to its 2015 annual report, the NNAS received 4,027 applications from IENs between August 2014 and March 2015, with an average of 102 days processing time from start to the issuance of an advisory report.

This report states if an IEN’s education is comparable to that of Canadian entry-to-practice nursing education. The evaluation is shared with the regulatory body that makes the final decision whether the IEN could proceed in their registration or if completion of additional courses is needed.

The body noted that the majority of the applicants were already in Canada when they applied, while approximately 30 percent were outside of Canada.

Siu Mee Cheng, executive director with NNAS in an emailed statement to INQUIRER.net said that Filipino nurses, being the largest group, experience similar to those faced by other nationalities.

Sheen Acosta, 29 years old, started a Facebook page for Filipino nurses in July 2015. The page with only five members soon grew to become the Pinoy IENs. Now with over 3,000 virtual members, the group is active in the provinces of Alberta, British Columbia, Ontario and Saskatchewan.

“NNAS was new to us and we were groping for information,” she said, recalling what led to the formation of the support group. The La Union Colleges graduate in 2007 worked as a registered nurse in Saudi Arabia before coming to Ontario to work as a live-in caregiver.

Acosta believes that the $650 fee (U.S.) is unreasonable since most of the applicants work as caregivers earning minimum wage. Members complain that because the fees are in the U.S. currency, Canada’s struggling economy makes the fees more expensive.

“It becomes a problem for those who have a tight budget,” said another applicant, Charm Campos.

The twenty-six year-old Campos, a graduate of St. Paul University received a “not comparable” to RN education report from the NNAS. Her school was recognized by the Commission on Higher Education (CHEd) in the Philippines as a center of excellence in nursing.

Meanwhile, inconsistent answers from the NNAS, whether through its online dashboard or actual agent, exacerbate their frustration, Acosta said.

Two months before his account expired, Jay Ong, 30 years old, checked his status online via the NNAS website. “I was shocked to see that I still have missing employment [documents] and they did not [inform] me about it,” said Ong who was a nurse in Cebu.

Ong said he ended up paying the reactivation fee of $180 to keep his file open, while waiting for additional documents.

Sam Lagman, 27 years old from Angeles City who works in a grocery store in British Columbia, had a different experience.

On March 18, she received an email confirming that she had been evaluated for the RN and LPN streams. This status changed quickly the following day when her NNAS advisory report was no longer available online.

“I called them, and the agent said someone had reverted my status by using the wrong parameters,” adding that the agent said it would have taken a long time to fix had she not discovered the mistake.

“NNAS certainly understands and sympathizes with each applicant’s urgency,” Cheng said, adding that the body is committed to providing timely and high quality service, while supporting the 21 regulatory bodies in ensuring public safety.

The process requires all the documents to come from the primary source. Once received, each document is scrutinized for authenticity.

Cheng stressed that the assessment process in evaluating the education curriculum of an IEN is a “labor- and time-intensive process that must be undertaken as comprehensively as possible to ensure accuracy.”

This way, the registration requirements set by the regulatory bodies to ensure public safety are met, added Cheng.

Members of Pinoy IENs generally received a “non-comparable” assessment of their credentials when measured against the Canadian RN education, while “somewhat comparable” to the LPN and RPN education, members said.

The group is seeking to know the criteria that support this decision-making, complaining that the lack of transparency from the NNAS has created frustration among IENs.

“Most of us think this is because Philippine education is two years shorter than that of Canadian. But how come those who have a master’s degree receive the same evaluation?” Acosta said.

The group also states that in the U.S. and Middle East, Philippine-trained nurses only go through a short process in order to register.

For the NNAS, Cheng said that the assessment of each applicant’s education is done in terms of comparability to the Canadian national entry-to-practice competencies and sample nursing curricula, an approach that enables the body to perform evaluations in a comprehensive manner.

Before the NNAS, foreign-trained nurses had to navigate the system using different pathways that the 21 nursing bodies employ. Now, the NNAS took over the initial phase of registration for the regulatory bodies, which covers the first four of the ten steps IENs have to go through before becoming a practicing nurse in Canada.

“The benefits for IENs are significant because they only have to start one application in order to apply to any province and to anyone of the nursing [regulatory bodies],” said Cheng. Applicants have the option to choose more than one province or regulatory body when applying.

In its three-year plan, the NNAS has instructed its 21 regulatory members to undertake an “environmental scan” of their practices to identify points for further harmonization of IEN registration over the next three years.

Pinoy IENs maintains that since its inception, the NNAS has added burdens to aspiring IENs given that the regulatory bodies still conduct their own assessment following a report from NNAS.

“We would like the NNAS to review its practice and make significant improvements. The system is just like a money-making scheme. It is clearly not serving its purpose,” the group said. It plans to dialogue with the NNAS to voice out its members’ concerns.

For the IENs, nursing remains a calling despite the rigorous process. “We all aspire to practice our beloved profession,” said 38-year-old Lyn Nugoy, a graduate of Mariano Marcos State University.

“It has been an aspiration for me to work as a nurse here. I am greatly inspired by stories about people who succeeded in practicing their profession here despite the challenges they faced,” she added.

To help Filipino nurses achieve this goal, Pinoy IEN has been holding free review sessions every Saturday at the Thorncliffe Neighborhood Office for its members in the Greater Toronto Area.