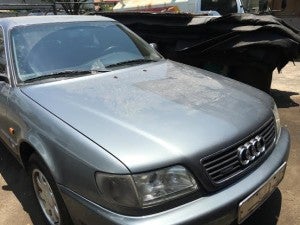 This is one of the three sports utility vehicles (SUVs) consigned to a Korean national and seized by the Subic Bay Freeport customs authorities for having been misdeclared as used truck replacement spare parts. (Photo taken by Allan Macatuno, Inquirer Northern Luzon, Apr. 25, 2016).

SUBIC BAY FREEPORT — The Bureau of Customs (BOC) seized three second-hand luxury cars worth P3 million inside this free port for having been misdeclared as 52 packages of used truck replacement spare parts.

Lawyer Ernelito Aquino, district collector of the Port of Subic, on Monday said the seized sports utility vehicles (SUVs) were a BMW, a Chrysler, and an Audi A6, all consigned to a Korean national identified as Jinseok Jeong of Barangay (village) New Cabalan in Olongapo City.

The cars arrived at the Port of Subic on March 10 from Busan, South Korea, on board the container ship Bomar Spring.

Aquino said the consignee would be charged with violating section 2503 of the Tariff and Customs Code of the Philippines.  SFM