India scrambles to get water to 330 million people 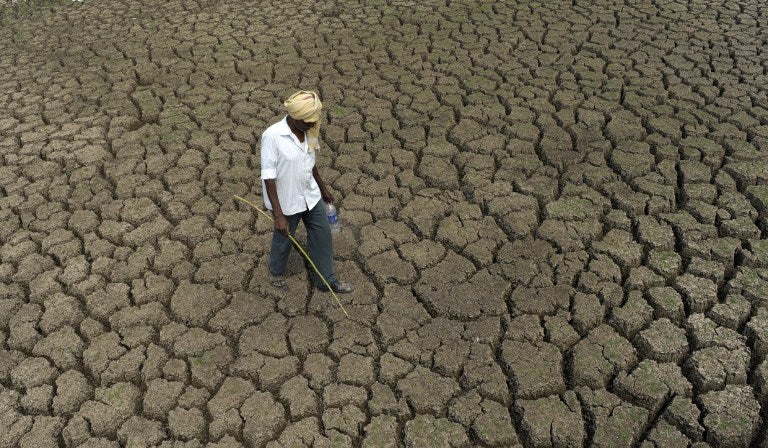 An Indian shepherd walks on the bed of the dried up Osman Sagar Lake, commonly known as Gandipet, on the outskirts of Hyderabad on March 4, 2016. AFP

India is scrambling to get water to drought-hit parts of the country as a sweltering heatwave adds to the misery.

Some 330 million people in 256 of the nation’s 664 districts have been affected, the government told the Supreme Court last week. So far, 10 of India’s 29 states have declared themselves in a state of drought, after two years of below-average monsoon rains.

Water trains are running daily to deliver water to parts of Maharashtra, while Odisha state has extended summer vacations for schools and deployed more than 1,000 tankers to supply water.

In the southern state of Telangana, the government has promised to continue supplying drinking water to affected households until the monsoon rains in June.

“The drinking water supply is the biggest concern… because there is no rain, the water table has come down, and we are losing tube wells,” said Pradipta Kumar Mohapatra, the special relief commissioner for Odisha, where temperatures shot past 45 deg C this month.

“We haven’t had any rains for seven months, which is unusual for Orissa, which is a coastal state.”

In many areas, the drought has been aggravated by soaring temperatures, even before the peak summer months arrive, leaving more than 100 people dead and triggering concerns that already-low reservoir waters will be depleted further.

According to Central Water Commission data released last week, storage levels in India’s 91 reservoirs, which also provide water for hydro-power, have dipped to 22 percent of total capacity, down from 27 percent last month.

The water crisis has intensified this year because of two poor monsoons in a row. The monsoons usually move from south to north and then east, slowly covering the country before withdrawing in September. The rains recharge water bodies and groundwater.

The poor monsoons have been attributed partly to the El Nino effect, which involves the warming of Pacific waters and has always affected the rains in India.

The India Meteorological Department in its monsoon update for this year predicted above-average rainfall. Even so, some experts believe it will take time for water tables to be recharged.

Parineeta Dandekar, an associate coordinator of the South Asia Network on Dams, Rivers and People, said the lowest water levels are expected at Marathwada in Maharashtra state. And the situation is expected to extend to Telangana, Andhra Pradesh and Karnataka states, which are all strongly dependent on groundwater, she said.

“The groundwater crisis is not going to stop even if we have good monsoons,” she said.

Sugar cane production in Maharashtra is expected to drop. Meanwhile, in the south of the country, there are concerns that cultivation of rice and cotton could be affected as well if the upcoming monsoon rains are poor.

Reports in the Indian media said small farmers in southern Telangana were migrating elsewhere in search of employment.

The governments in at least two states – Rajasthan and Maharashtra – are facing flak for hosting cricket matches as part of next month’s Indian Premier League.

Public anger has also been directed at politicians amid questions over India’s handling of its water resources.

Water Resources Minister Uma Bharti was criticized for saying it was “pointless to plan in advance” for drought.

The crisis, farmers have warned, could affect the country’s agriculture economy.

“This is going to lead to utter chaos on the agriculture front. In India, 86 percent of farmers are small and marginal. And unfortunately we are not trained in water management,” said P. Chengal Reddy, the secretary-general of the Consortium of Indian Farmers Association. “Many farmers are now suffering from (lack of) drinking water – forget agriculture.”

Still, in one area in Maharashtra hit badly by drought, people have gained some respite.

Officials in Latur district said that, with millions of litres of water being brought in by train, the water shortage had been mitigated.

“The crisis has eased with the train. The water will continue to come by train till the monsoons,” said Pandurang Pole, the district administration’s top official. “Even so, we are telling people to use water wisely.”