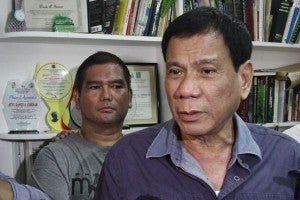 She posted on Twitter: “Rape and murder should never be joked about or trivialized. Violence against women and girls is unacceptable anytime, anywhere.”

The ambassador’s statement, which was also amplified on Facebook, drew a mixture of reactions from netizens all over the world.

It prompted the embassy’s official account to release another statement on the conversation thread, saying that it has the “right to moderate comments which are discriminatory, hateful or threatening and actions which may offend, insult, humiliate or intimidate.”

READ:  Australian Embassy: Rape, murder should never be joked about

Duterte’s army of supporters defended the distasteful remark and flooded the post with comments.

“Duterte is a brute, but he has done his job well,” said Nielynn Canora Babol.

Alberto Navales pointed out that Duterte saved the hostages, adding “you’re welcome” at the end of his comment.

“It was a narrative. and i don’t understand why the media – and quickly his rivals – labeled it as a joke. one desperate effort to ruin his candidacy,” Mardy Halcon said.

Most of the netizens, who posted their reactions, said the people should understand the full story, implying that the mayor was being misunderstood.

But others have been declaring withdrawal of support to Rodrigo Duterte after the incident.

Robin Haines Merrill, an American missionary who was in Manila at the same time as the late Hamill, recounted the 1989 hostage-taking. He said “Jacqueline was raped and had her throat slit while ministering in the jails in southern Philippines…”

Merrill ended his post by saying “DON’T VOTE FOR PEOPLE who speak vile things against WOMEN!! We are ALL made in the Image of God!!”

As of press time, Merrill’s post had garnered 800 likes and has been shared 3,000 times by Facebook netizens, including presidential spokesperson Manolo Quezon. Others issued their own apologies and renouncement of the presidential candidate’s behavior.

“Any person with strong morals would know that these things shouldn’t be taken lightly,” wrote Sheila Estacio de Asis.

Thelma Galvez Nambu commented: “Thanks, Robin for your post. I do not want a president who does not even think twice about what he says about women and life, in general.”

Prospero Pulma quipped: “Rape jokes are best told in front of a rape victim or a rape-homicide victim’s relatives so one will know rape is no laughing matter.”  SFM

(Editor’s Note:  Paragraph 14 of this story was corrected on April 21, 2016, to state that missionary Robin Haines Merrill is an American, not Australian as previously reported.)

Read Next
Poe’s ID defense vs. charge of using fake SS no. may be spurious
EDITORS' PICK
Look Through: The fate of impounded stray dogs
House energy committee chair Arroyo bats for cheap electricity
Unleash the photographer in you this World Photography Day with vivo smartphones
What to watch out for when selecting a video surveillance solution
23,000 cops to be deployed nationwide for school reopening
DOH says COVID-19 cases plateauing, but public shouldn’t be ‘complacent’
MOST READ
Sharon Cuneta asks for prayers for friend in ICU who suffered silent stroke
Korina Sanchez reunites with former ABS-CBN co-anchors Julius Babao, Cheryl Cosim
Light therapy could be the answer to your sleep problems
Solons file resolutions seeking probe on ABS-CBN, TV5 merger
Don't miss out on the latest news and information.