US vows support for allies in Asia 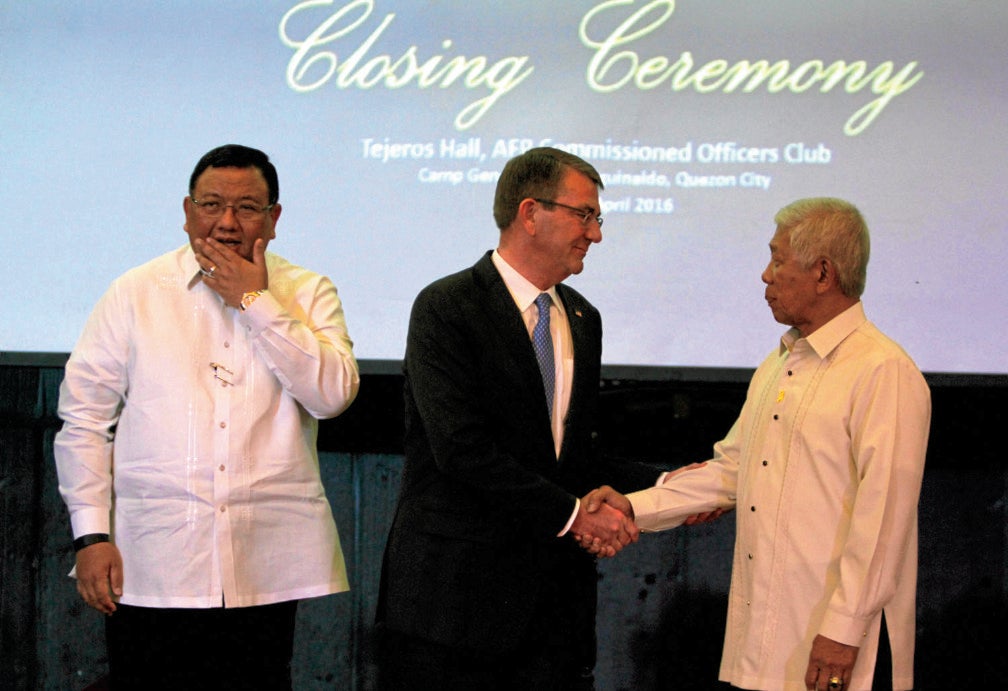 “At a time of change in this dynamic region, and democratic transitions in the Philippines and the United States, we will continue to stand shoulder to shoulder,” US Defense Secretary Ashton Carter said at the closing ceremony for this year’s Balikatan (shoulder-to-shoulder) war games between US and Philippine troops.

“We will continue to stand up for our safety and freedoms, for those of our friends and allies, and for the values, principles, and rules-based order that has benefited so many for so long,” Carter said.

The Pentagon chief arrived in Manila on Wednesday to observe the war games, which involved about 9,000 US and Philippine troops.

Carter was the first American defense chief to observe the annual joint maneuvers, and his visit to Manila was seen as reflecting the United States’ commitment to its defense alliance with the Philippines.

Carter also highlighted the presence of soldiers from Australia and Japan as observers in the Balikatan this year, emphasizing that the two key regional players had also expressed concerns over China’s expansion in the South China Sea.

“I am pleased to see so many nations interested in working together to promote stability and security in the Asia-Pacific [region],” he said.

China claims almost the whole South China Sea, including waters close to the shores of Brunei, Malaysia, the Philippines, Vietnam and Taiwan, all of which also have overlapping claims to territory in the strategic waterway.

To bolster its sweeping claims, China has built artificial islands in the Spratly archipelago and topped some of them with airstrips that could be used by military aircraft.

The United States had criticized China for its aggressive moves, challenging Beijing’s claims by sending warships and aircraft near the artificial islands in so-called freedom-of-navigation operations.

On Thursday, Carter announced that the United States and the Philippines had begun joint patrols in the South China Sea and that Washington would send troops and military equipment on regular rotations in the Philippines under a new defense deal with Manila.

The announcement angered China, which said it would “resolutely defend” its interests in the South China Sea.

In his remarks at the closing ceremony, Defense Secretary Voltaire Gazmin also welcomed the participation of Australian and Japanese soldiers and military personnel from other countries in the region in the joint exercises as observers.

“[Inviting] observers from other countries contributes to our thrust of enhancing multilateral security cooperation and engaging our other partners. We should continue to use this opportunity to exchange best practices and learn from each other’s experiences,” Gazmin said.

Armed Forces of the Philippines Chief of Staff Gen. Hernando Iriberri praised the continuing success and achievements of the annual war games.

He cited the expansion of ties with the observer countries, noting that it projects the message that it is better to be inclusive for cooperative security rather than exclusivity.

Iriberri also pointed out the enhanced security cooperation between the United States and the Philippines.

“I think we are poised to become best friends for a long time, and this should bode well for all, for best friends do more together. This is who we are, and this is what we do,” he said.

Foreign Secretary Jose Rene Almendras thanked the US soldiers who took part in this year’s joint maneuvers, saying he hoped the Americans enjoyed their brief stay in the Philippines.

“We are grateful for your visit, and we hope that as you leave the Philippines, you will agree that it is more fun in the Philippines,” Almendras said, using the slogan for the Department of Tourism’s 2012 marketing campaign to attract more tourists to the country.

Some 5,000 US troops participated in this year’s Balikatan, which began on April 4 and ended yesterday.

Around 3,500 Filipino soldiers took part in the joint exercises.

The highlight of the two-week joint maneuvers was Thursday’s live-fire exercises in Crow Valley, Capas, Tarlac province, during which US troops demonstrated the capability of an advanced US long-range missile system.

Almendras noted that the American servicemen participated in the Balikatan exercises in the summer, which he said was “the hottest period of the year.”

“May the heat of the summer in the Philippines kindle and enhance the warmth of the friendship from the shared experience that you had with our soldiers and with the Filipino people whose lives you have touched,” he said. With a report from AFP