US defense chief visits US warship in South China Sea 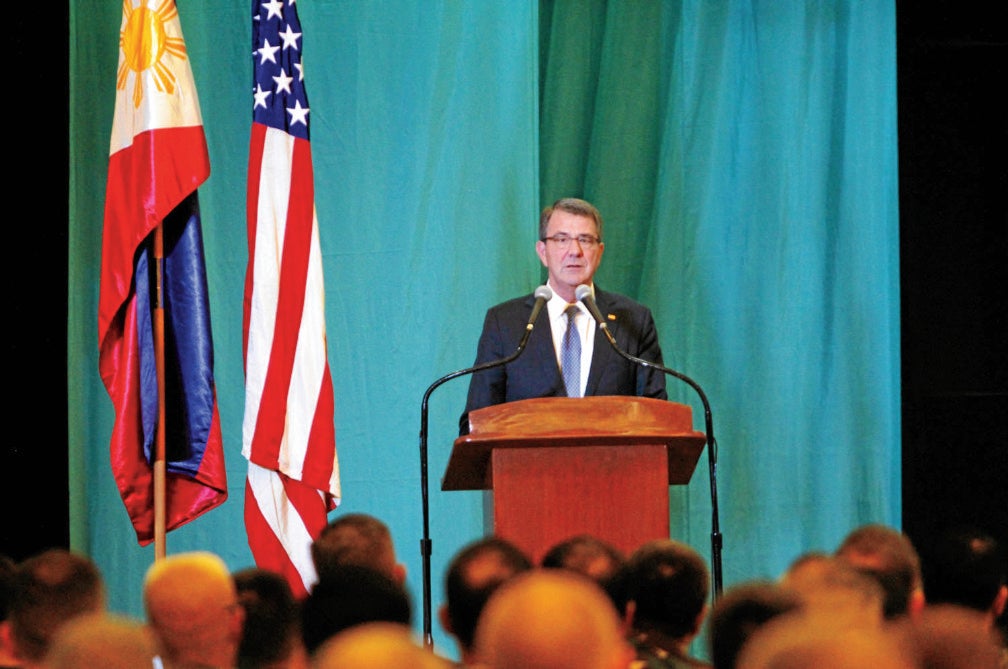 United States Secretary of Defense Ashton Carter speaks during the closing ceremony of Balikatan 2016 at Camp Aguinaldo in Quezon City. RICHARD A. REYES

US Defense Secretary Ashton Carter visited a warship close to flash-point waters of the South China Sea on Friday in a show of American commitment to maintaining stability in the hotly contested waterway amid China’s increasingly aggressive behavior in the region.

“It is a message to the region that the US intends to continue to play a role in keeping peace and stability in this region,” Carter told reporters aboard the USS John C. Stennis, a nuclear-powered aircraft carrier that can carry about 75 planes and helicopter.

Carter took a short flight on a Bell Boeing V-22 Osprey military aircraft to the aircraft carrier from Palawan.

Palawan is the closest Philippine landmass to the Spratly archipelago, where China has constructed artificial islands on seven reefs and built airstrips on some of them that could be used by military aircraft to assert its claim to almost all of the resource-rich South China Sea.

From the closing ceremony for the annual Balikatan (shoulder-to-shoulder) joint exercises between the US and the Philippine armies at Camp Aguinaldo in Quezon City, Carter and the Filipino defense officials rode to Villamor Air Base in Pasay City, where a Boeing C-17 Globemaster aircraft flew them to Palawan.

Philippine and American officials would not disclose exactly where the Stennis was sailing on Friday.

A US official traveling with Carter told Agence France-Presse (AFP) the Stennis was in Philippine-claimed waters.

During his time aboard the Stennis, Carter saw the launching and landing of F/A 18 “Hornet” fighter jets.

Rear Adm. Ron Boxall, commander of the carrier group with responsibility for the Stennis, said one or two Chinese vessels had been following the carrier but there had been no tensions.

“They have been operating very professionally,” Boxall said.

“The Stennis has sailed in these waters many times before, not just here in the South China Sea but all around the vast Asia-Pacific [region], six times in the last several years,” Carter said.

From the aircraft carrier, Carter and the Philippine defense officials flew back to Manila in the afternoon. With a report from AFP

Read Next
‘Teleserye,’ ‘kilig’ now in Oxford Dictionary
EDITORS' PICK
‘Justice will be done,’ Duterte assures as he vowed probe on Jolo incident to bare ‘truth’
EuroMillions Superdraw: A lottery draw unlike any other is coming to the Philippines
Current dominant strain of COVID-19 more infectious than original—study
DOLE: Return of OFWs’ remains from Saudi to be ‘delayed,’ deadline moved to ‘early next week’
Smart releases Hyun Bin’s second TVC
Water remains our saving grace right now
MOST READ
Locsin warns of ‘severest response’ if China’s army drills in SCS ‘spill over’ to PH domain
Duterte tells military: No other president looked at you the way I did
BREAKING: Duterte signs anti-terror bill into law
‘Very timely, historic’: Senators laud passage of anti-terror bill despite ‘pressures’
Don't miss out on the latest news and information.