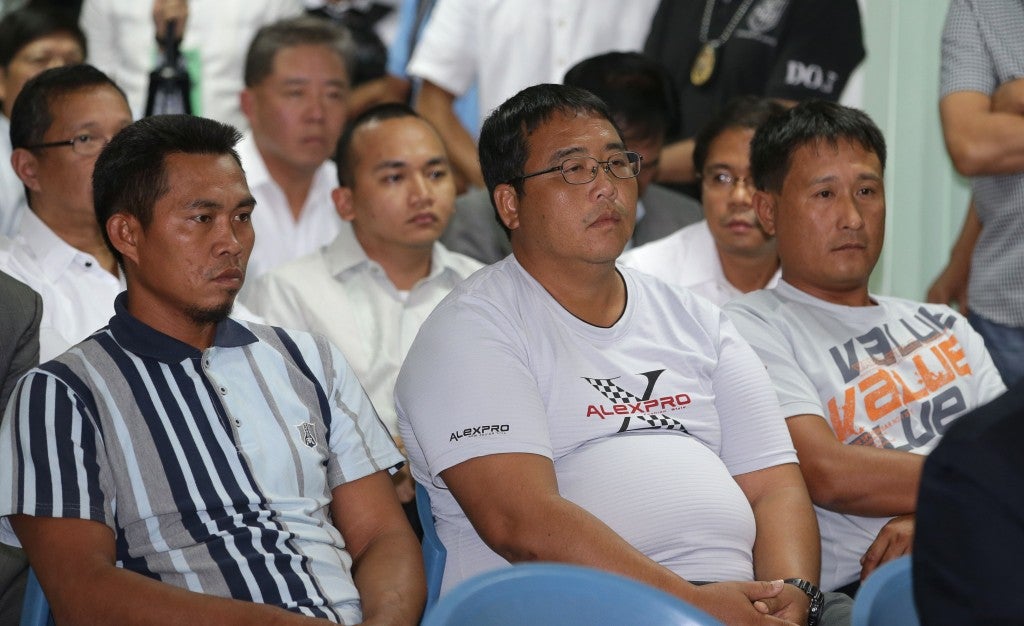 Fishermen Indonesian Imam Buchaeri, left, Taiwanese Hong Jie Shang, center, and Hong Yu Zhi, right, listen during the start of a hearing at the Philippine Department of Justice in Manila sometime in May, 2014. AP FILE PHOTO

A Taiwanese court has ordered eight Philippine Coast Guard (PCG) officers to jointly pay NT$3.198 million (P4.55 million) to the family of the Taiwanese fisherman who was killed in a chase involving the PCG and an allegedly trespassing Taiwanese fishing vessel at the Balintang Channel off Batanes almost three years ago.

The Pingtung District Court awarded civil damages to the family of slain Taiwanese fisherman Hong Shi Cheng, saying the PCG officers had the “criminal intent of killing people” when they opened fire at the Taiwanese vessel Guang Da Xing No. 28 during what was supposed to be a routine maritime patrol on May 9, 2013.

The Taiwan court issued the civil ruling even as the PCG officers are still undergoing a criminal trial for Hong’s death at a Manila regional trial court, on a case brought against them by the Department of Justice (DOJ).

“… This case is a foreign-related civil case involving the foreigners and this court has the right of jurisdiction,” read the ruling penned by Pingtung District 3rd Civil Court Judge Chen Yi-Hsien, a copy of which was obtained by the Inquirer.

The Philippine justice department has not been formally informed of the ruling.

Prosecutors handling the criminal case in the Philippines said they were “surprised” by the Taiwan court’s decision.  The panel has been closely coordinating with Taiwanese authorities in pursuing the homicide charge against the PCG men.  Hong’s son, Hong Yu Tzu, is one of the prosecution witnesses.

“The DOJ panel will study the ruling first, as soon as we are officially informed,” said Senior Assistant State Prosecutor Juan Pedro Navera, the head of the prosecution panel.

It also held that while “the defendants’ residence and the place of the infringement (crime) is entitled to jurisdiction,” the Hong family initiated the civil suit as the incident occurred on a ship registered at the Liuchiu township of Pingtung County, which is “in our (Taiwan’s) economic sea area.”

“The defendants of this case are the Philippine nationals; the place of the infringement act is on the ship of our (Taiwan’s) nationality and the victims are also our nationals. It shall be deemed it is closely connected to our country, and no other law is found with the most close connection,” the ruling read.

“… In other words, our law will be the applicable law,” said the Taiwan court.

In ordering the civil compensation, the Taiwan court said “the evidence is more than sufficient” to prove that the eight PCG officers had played a role in Hong’s death.

Recalling the details of the incident in its ruling, the Taiwanese court said the Filipino officers accosted the ship on which the 65-year-old Hong was a crewmember on the suspicion that it was “engaged in longlining fishing operations” at the Balintang Channel.

The fishing vessel, which had four fishermen on board, tried to get away, and De la Cruz ordered his men to pursue it, the court said.

Once the Philippine ship caught up with the Taiwanese boat, the PCG men, “jointly (with) the criminal intent of killing people” started spraying the latter with bullets.

The court singled out De la Cruz as the one who ordered the seven other defendants to shoot at the Taiwan fishing boat, using their machine guns and other firearms.

The court said “at least 108 shots were fired” within 75 minutes, hitting the hull, bow, cockpit and other parts of the vessel, where the fishermen tried to hide.

A bullet fired by Aguila penetrated the engine room and fatally hit Hong.

The court said the PCG men’s use of force in accosting an “unarmed” vessel violated the Philippines’ own maritime law enforcement guidelines, which discourages the use of lethal weapons unless under threat of injury or death.

The PCG has contended that its personnel had acted in self-defense and were only performing their duty in trying to stop illegal fishing and poaching inside Philippine territory.

It said the PCG men had spotted two foreign vessels inside Philippine territory and when the PCG vessel tried to board the smaller of the two boats, the latter began evasive maneuvers and even attempted to ram the Philippine vessel, prompting the PCG personnel on board to fire warning shots.

The Balintang Channel incident caused a brief strain in ties between Taiwan and the Philippines in 2013, with outraged Taiwanese demanding an apology from President Aquino.

Taipei threatened the Philippines with economic sanctions and discouraged its tourists from visiting the country. Relations have since been restored.

In November, Manila and Taipei signed a fisheries agreement aimed at curbing fisheries disputes between the two sides, given their overlapping exclusive economic zones.

Under the agreement, one side will give a one-hour notification to fisheries and coast guard authorities of the other party before taking action against a vessel caught operating illegally in its waters.