’Kilig to the bones’ listed among sample phrases
By: Kristine Angeli Sabillo - @KSabilloINQ
INQUIRER.net / 11:08 AM April 15, 2016 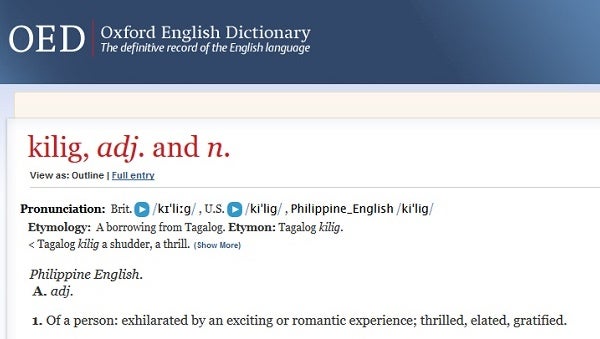 The Filipino word “kilig,” a tingly romantic feeling that is hard to define through a single English word, has now been included in the Oxford English Dictionary (OED).

“Kilig,” which is defined by OED as an adjective and a noun that means a “shudder” or a “thrill,” was included in the March 2016 updated list of the dictionary.

Also listed was “teleserye,” which refers to a television soap opera.

As an adjective, OED defines a person feeling “kilig” as someone “exhilarated by an exciting or romantic experience.” It could also mean thrilled, elated or gratified.

As a noun, “kilig” refers to “exhilaration or elation caused by an exciting or romantic experience.”

“A borrowing from Tagalog,” OED wrote in the etymology section of the word “kilig.”

Kilig to the bones

Among the sample phrases used by OED are: “kilig to the bones,” an adjective that means being utterly thrilled; “kilig factor,” an element which generates exhilaration; and “kilig moment,” a thrillingly romantic moment.

The dictionary’s webpage on the word listed several news website as sources of the phrases, which are used in both news and feature stories.

A lifestyle article from the Inquirer cited by the OED was a question and answer article which had the interviewee, Mikko Sumulong of I Try DIY, saying, “When someone compliments me on something I worked on, there’s that kilig feeling that comes with me saying, ‘Thanks, I made it!’”

Another referenced article is a Youngblood essay on prom. “Everyone feels the kilig as they think their friends are close to winning their date,” the writer of “Stag in the Wilderness” said.

∙ Stag in the wilderness

And finally there’s the Inquirer review of the film “Fifty Shades of Grey,” which was, minus “the skewed sexual preference,” “a young adult movie, loaded with kilig moments.”

∙ ‘Fifty Shades’ and sex: Hey, I was expecting worse

Other words included in the March 2016 update of OED are armchaired, bruh, Daddy Warbucks, footballing, leg-breaker, leggy, redshirting, and vlog.

Jonathan Dent, OED senior assistant editor, said the March update includes “neologisms and newly researched and published entries for words and phrases from the whole history of the English language.”

Dent said the list also looks beyond the US and the United Kingdom as it includes words like “ang moh,” a Singapore English term for a light-skinned person, and “yum cha,” a Chinese meal of dim sum and tea.

In June last year, Danica Salazar, a Filipino lexicographer based in the United Kingdom who works as consultant editor for the OED, told Inquirer that “kilig” may soon be included in the dictionary.

The June 2016 update of the OED included 40 Filipino terms as part of the dictionary’s “ongoing commitment to recording words from all varieties of English, throughout the world.” It was the largest single batch of words from Philippine English, Salazar said.

At that time, INQUIRER.net readers commented that “kilig” should be included. Another said “sayang,” an expression of regret or lost opportunity, and “gigil,” which has been described as an irresistible urge or emotion, should be next in line.

Will we see “gigil” in the “definitive record of the English language” anytime soon? CDG/RC

Read Next
US Defense Secretary Carter to visit warship in South China Sea
EDITORS' PICK
Acer starts the year off strong with the Aspire Vero National Geographic Edition
Gear up and get ready to play with Yamaha Mio Gear
Over 3 Million worth of prizes to be won at Smart Padala’s SENDali Manalo Promo!
If elected VP, Sara Duterte will push for mandatory military service for all Filipinos
Marcos-era elections: Not what his son signed up for
Senate bill seeks to penalize employers requiring employees to work during rest hours
MOST READ
‘Sampal sa gobyerno:’ Drilon wants unvaxxed PAO chief barred from working
Bongbong-Sara tandem names 7 candidates in initial senatorial slate
Vice mayor slams Vico Sotto for turning Pasig into a ‘puro palabas’ city
Troy Montero, Aubrey Miles and kids in isolation after testing positive for COVID-19
Don't miss out on the latest news and information.