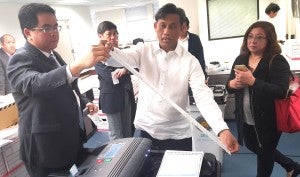 SAN FRANCISCO — The Philippine Consulate in San Francisco conducted a successful final testing and sealing of the vote counting machines (VCMs) in preparation for the overseas voting that started on April 9 for the Philippine national elections on May 9.

Five VCMs were tested by the consulate officials, led by Consul-General Henry Bensurto Jr., Deputy Consul-General Jaime Ramon Ascalon and head of overseas voting team Consul Reginald Bernabe together with other consuls serving as special board of election inspectors going through the different stages of the election process.

Shipped in boxes straight from the Commission on Elections (Comelec) office in Manila, the consuls unpacked the paraphernalia that included the security seals, secure digital cards, other materials, supplies and the VCM, among others.

They made sure that the VCMs were functioning well by conducting mock election then printing reports and voting receipts before finally sealing the secure digital cards and the VCMs ready for use starting on the first day of overseas election April 9.

“We are very happy that all five VCMs, as well as the secure digital cards, are working well after the first round of testing and the diagnostic tests were also successful. That is a very good indication,” Bensurto reported, adding that the machines worked well and the digital cards were blank, as “any data contained in the SD card maybe used for cheating like dagdag bawas.” 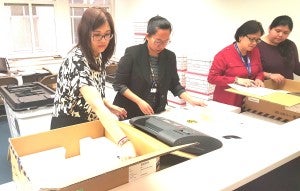 Bensurto said they also made sure that the testing and sealing process was open to the public.

“One machine experienced a paper jam but was quickly cleared through a button that needed to be pressed. It was good that happened so we would know how to trouble shoot should that happen again. It is also important that it can scan and determine whether the ballot was correctly filled out. True enough when one (test) form had more than the required number of senators shaded, the vote for senators was invalidated or spoiled, but on the two other (for President and Vice-President) with correct entries were validated,” disclosed Bensurto.

For the first time in San Francisco and other North America-based consulates, the Comelec allowed two modes of voting one through personal appearance, and the other by mail for 30 days with the voters left to decide on how they want to vote.

“Once they see their names on the overseas voter’s list through the Comelec website and their ballots have not yet been mailed to them, the voters may communicate with us right away at (415) 433-6666 ext. 888 or email us at [email protected] should they decide to vote in the consulate premises personally,” Bensurto explained. “If we do not get the communication through phone call or email, we will send the ballots through mail so no one would be disenfranchised. “ 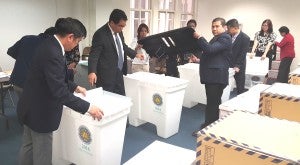 Voters are advised to bring their identification cards like driver’s license, passport, or anything that can identify them for cross verification with the list of registered voters.

“We already started mailing the ballots to places far from San Francisco even before the actual start of elections because the sheer number of an estimate of more than 47,000 forms to be mailed is no joke and would entail sufficient time for mailing. We are asking the voters to act and vote right away and not postpone it for another day as ballots received after May 9 will no longer be valid. The date the ballot was actually received is very important,” stressed Bensurto.

There was hardly any participation of watchers and watchdogs in the testing and sealing, Bensurto opined that the reason for this was either people have much trust and confidence in the process and therefore did not need a watcher. Another reason may be the lack of interest, which for him was more dangerous.

“The procedure is in place, it is orderly and I cannot say anything not good. I think they are on top of the situation and, for this, I am very satisfied as I also perceive that the election would be smooth sailing. Procedurally, I think everything went well. The five consuls who are members of the special board of election inspectors (SBEI) for the five VCMs and are knowledgeable on the proceedings are ready for the conduct of the election,” observed Alonto.

“To all registered voters in North America, we all know that this election is an exercise of democracy and if we believe that it is of, for and by the people, then this the time to reflect on that,” Bensurto said. “We have to start by exercising this sacred right of choosing the right leaders to strengthen the institutions of democracy. Come out, freely vote and express our opinion in the forms of ballots.”

Testing at Embassy in D.C.

Meanwhile, in Washington, D.C., the final testing and sealing (FTS) of Comelec vote counting machines (VCMs) was held at the Romulo Hall of the Philippine Embassy on Wednesday, April 6. 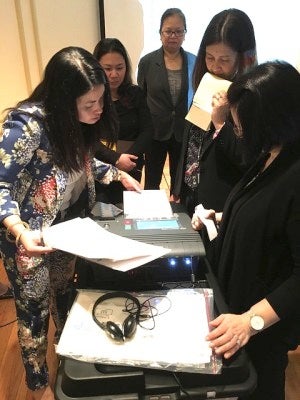 Consul Katrina Borja-Martin (left) feeds test ballots to one vote counting machine (VCM), during the final testing and sealing (FTS) of VCMs at the Philippine Embassy on 06 April 2016. PH EMBASSY

Consul Katrina Borja-Martin led the procedures along with Embassy personnel who took their oaths as Special Board of Election Inspectors and Special Ballot Reception and Custody Group last month.

The VCMs were checked for accuracy and security, using test ballots fed to the machines. It also checked if the count of the machines would match the manual counting done after the actual voting.

The Embassy tested three (3) VCMs using 10 test ballots each for the 47 precincts under the Post’s jurisdiction.

“The machines are in good condition, but it is very important that the voters follow the instructions about shading the ovals that correspond to the respective candidates that they want to vote for, to ensure that their votes will be read and counted by the VCMs,” Consul Borja-Martin said. 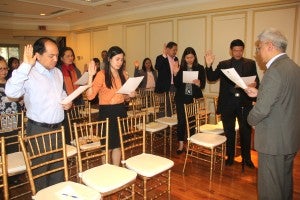 Consul General Emilio Fernandez facilitates the oath taking of Embassy personnel as Special Board of Election Inspectors (SBEI) and Special Ballot Reception and Custody Group (SBRCG), for purposes of the 2016 Philippine National Elections at the Romulo Hall of the Philippine Embassy on 23 March 2016. PH EMBASSY

“The ovals have to be fully-shaded in black ink, no check or cross marks. The votes cast should also not exceed the number of vacancies,” the Consul re-iterated.

The FTS is the last preparatory step for the Overseas Voting that will start on April 9, 2016, and will run through May 9, 2016.