Getting U.S. citizenship easier than getting green card 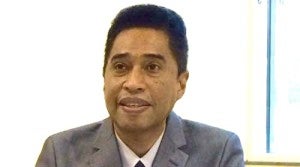 Henry Murillo, a singer from Colombia, says applying to be a U.S. citizen was easier than he thought. He found out about free legal services available to him from a Spanish-language newspaper in Charlotte. ANTHONY ADVINCULA

CHARLOTTE, North Carolina — Getting a green card can be a long, arduous process for many immigrants. Some even have to wait for 25 years or spend tens of thousands of dollars to get legal permanent residency in the United States.

Because of this, legal permanent residents who are eligible for naturalization often think that applying for U.S. citizenship is harder than it really is.

In fact, green card holders can access free services to help them with their applications, including fee waivers and language waivers for eligible applicants. These services are available through free citizenship workshops and clinics hosted by local organizations that form part of the New Americans Campaign, a national coalition to make citizenship more accessible.

“Getting your green card is like having a root canal, but getting your citizenship is just like getting your regular cleaning,” said Meredith Brandt, communications associate of the National Immigration Forum.

Monica Bourommavong, citizenship outreach coordinator for the Southeast Asian Coalition, said that 95 percent of individuals and families they help with their U.S. citizenship application are eligible for a fee waiver.

“Most of them are low income,” she said. “And a majority of them are not proficient in English, so we are here to help them with their application process.”

In Charlotte, the Asian population continues to rise rapidly — the third fastest in the country. Bourommavong says that they have helped eligible applicants from Vietnam, the Philippines, Burma, Laos and Cambodia.

Getting the word out

Henry Murillo, a singer from Colombia, found out about the free legal services from a Spanish-language newspaper in Charlotte.

“I didn’t know about this kind of program and service. I didn’t know that you could actually apply with a fee waiver,” said Murillo, who lived in the United States for more than 20 years before he became a U.S. citizen in 2015.

Murillo expected the process of applying for citizenship to be more difficult than it was. “I thought if I won’t do it right, I might lose my green card,” he said. “I just didn’t want to experience that difficult process again.”

But Murillo says that a community-based organization helped him to study for the test and enhance his English-language skills. He also got help filling out the application form.

“I am very happy that I applied for my U.S. citizenship,” he said. “I feel more safe, and I am now more comfortable to be part of the country.”

In North Carolina, there are about 136,000 legal permanent residents who are eligible for naturalization, according to Maritza Solano, director of the Latin American Coalition. If they become U.S. citizens, they can petition family members to live in the United States, have the right to vote, be able to run for public office, work for a U.S. federal agency and, for certain countries, may be able to have dual citizenship.

According to community leaders and advocates for naturalization, another significant benefit of being a U.S. citizen is being able to travel and re-enter the country without a hassle.

“Traveling with a U.S. passport gives you more freedom,” said Solano. “It gives you protection from deportation and, if you are outside the country, it gives you U.S. consular protection.”

Mussie Membrahtu, 52, says that was the main reason he decided to apply for citizenship.

A few years ago, Membrahtu was driving back to the United States from Canada with his wife and young children. As they approached the checkpoint, he says that they politely showed their green cards and passports to the immigration officer.

Membrahtu, a native of Eritrea, ended up having to wait overnight while the officer did a background check.

“When I asked them [the officers] if we could go inside the checkpoint building, they told me they wouldn’t be able to do that. When I asked if there was a nearby hotel, they said it was 75 miles away,” he recalled. “My family slept in the car, in freezing weather.”

When they were finally allowed to re-enter the United States, Membrahtu says he couldn’t wait to apply for his U.S. citizenship. He now is waiting to take his oath.

“I don’t want to put my family in a situation like that ever again,” he said.

For more information about the New Americans Campaign and upcoming citizenship workshops, go to www.newamericanscampaign.org.