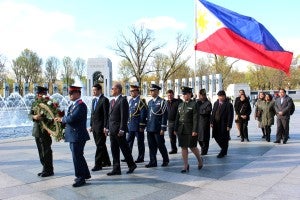 WASHINGTON, D.C.  — Lieutenant Celestino Almeda, 99, of Gaithersburg, Maryland and Private Rodolfo Panaglima, 86, of Arlington, Virginia were honored April 8 during public ceremonies marking the 74th anniversary of the fall of Bataan, one of the critical moments of World War II in the Pacific theater.

Observed every year on April 9, “Araw ng Kagitingan” (Day of Valor) commemorates the heroism of more than 260,000 Filipino and American soldiers who fought valiantly in Bataan and endured the 65-mile Bataan “Death March.”

Almeda and Panaglima are among only four survivors who reside in the Washington, D.C. metropolitan area. Today, fewer than 18,000 veterans remain, with many of them ailing and disabled, and dying at the rate of 50 a day.

At a commemoration program hosted by the Philippine Embassy, Maj. Gen. Antonio Taguba (Ret), renewed a call to U.S. Congress to pass the Filipino Veterans Congressional Gold Medal Award of 2015.

“We want to make sure that enough members of Congress in the House and Senate hear our voices and pass this bill this year before more veterans pass on,” Taguba said.

“Tonight’s commemoration is an opportunity for us to win more converts and to build momentum towards fuller recognition of Filipino veterans and fuller incorporation into the American story.

“What will it take to have the same energy to fulfill our promise to them,” Taguba asked, exhorting the audience to join the campaign.

Taguba is chairman of the Filipino Veterans Recognition and Education Project (FilVetREP), which is spearheading a national initiative to educate the American people about the Filipino World War II veterans and obtain national recognition for their wartime service.

Speaking on behalf of Philippine Ambassador Jose L. Cuisia, Jr., Charge d’affaires and Minister Patrick Chuasoto noted that “our veterans have rendered a service that has no equal and one which we can only hope to repay by living up to the promise of a free, peaceful and civilized nation… The sacrifice of our veterans to forge a lasting peace has ensured the path to economic prosperity.” 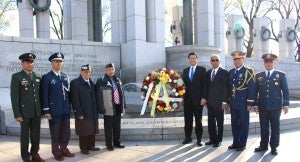 The Philippine Embassy and Consulates General across the United States, Chuasoto added, have also joined the collective efforts of the Filipino American community and other advocates and are continuing to reach out to members of Congress for their support.

Sponsored by U.S. Sen. Maize Hirono (D-HI) and introduced in June last year, S.B. 1555 is currently co-sponsored by 40 senators. To get the required 67 votes to pass, 27 more senate co-sponsors are needed. In the House, 218 votes are required for approval. So far, 68 U.S. Representatives have signed on to the H.R. 2737.

In appealing to the more than 60 community members and veterans’ families present, FilVetREP Communications Coordinator Ben de Guzman passed around petition forms and urged attendees to sign and enlist the support of friends and co-workers.

“It makes a big difference when Congress hears directly from you, their constituents,” he explained. “We can do this if we all put in an extra effort to make a phone call, or send an email to your senator or member of Congress.”

During the symposium part of the program, Taguba explained in detail the legislative and educational components of FilVetREP. “The first phase is to award the Congressional Gold Medal to Filipino and American veterans who served in the war effort,” Taguba pointed out.

“Each bronze replica costs $50, but we will not ask our veterans to pay. They’ve already paid 72 years ago. It is our community’s responsibility to raise the necessary funds.” After his presentation, he showed a video documentary, “Duty to Country.”

Former Diplomat and FilVetREP regional director Sonny Busa shared highlights of the Bataan Memorial March held last month in White Sands, NM in which 7,000 veterans participated. He noted that 10 Bataan survivors joined the march this year, compared to 18 the year before.

“Next year is the 75th anniversary,” Busa said. “I am encouraging all of you to come and give your moral support to our veterans.”

Philippine Veterans Affairs Director Maj. Gen. Delfin Lorenzana closed the evening program with a slide presentation on the history of the 1946 Rescission Acts and their lasting effect on Filipino World War II veterans.

Before the commemoration program, VFW Post 5471 Color Guard led a wreath laying ceremony at the World War II Memorial at the national mall. Participating were Philippine Embassy personnel and members of the Filipino American community.

Several tourists witnessed the solemn ceremony. Among them was May Dubria of Los Angeles, California, who was visiting the nation’s capital with her husband, Pat, and daughter, Dominique.

“My grandfather, Angel Salazar, served in World War II,” she said. “It is outrageous that to this day, the U.S. government has not recognized their service.” 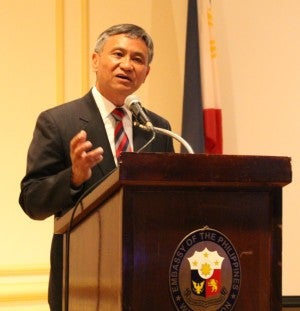 Tim Gimblett, a veteran of the Korean War, was surprised when he learned the sad plight of his Filipino comrades. “They are my brothers in arms, and they certainly deserve recognition,” he said, vowing to call his U.S. Representative when he returns to Philo, California.

In a blog written especially for the heroes of Bataan, Taguba notes that the

work of FilVetREP is a reminder to friends, allies and the public at large that “the Filipino World War II veterans story, while unique, is part of the American story as well.

“The brave men and women who marched for their lives in Bataan were American and Filipino alike, united in the struggle for freedom on a global scale. The bullets shot at them couldn’t discriminate against their Filipino or American targets because they stood shoulder to shoulder,” Taguba said.

“The sacrifices these soldiers made and their critical contribution to the war effort helped secure democracy for an entire grateful nation and deserve recognition that we can win for them now through passage of Congressional Gold Medal legislation,” he added.