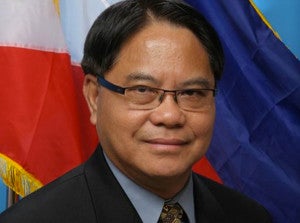 CHICAGO–The 12,665 registered Chicago area Filipino voters for coming May 9 Philippine national elections may be a small percentage of the 1.3 million land-based voters outside the Philippines, but local consular officials are not leaving any stone unturned to get them to vote.

(Another 49,000 voters work at sea and a systems is in place for them to be able to participate in the elections.)

For the past months, full-page advertisements in leading Filipino community newspapers have tried out to reach out to the voters, explaining various ways to exercise their rights and assuring the voters that the integrity of their ballots will be protected.

In its monthly community dialogue with members of the community on April 1, all three top consulate officials were present and took turns to present various issues and processes concerning the forthcoming elections.

Deputy Consul Victor Israel showed videotapes sent in by the presidential and vice presidential candidates highlighting the plans to serve the needs of overseas workers.

While ConGen Generoso Calonge and Deputy Consul Israel were reportedly summoned April 8 for an emergency consultative conference of the Department of Foreign Affairs in Manila, Consul Alena Borra will oversee the early electoral processes associated with the month-long voting in this city.

“(On April 9), we shall commence our solemn duty of administering the overseas voting for the 2016 Philippine National Elections and help preserve the will of our electorate,” Consul General Generoso D.G. Calonge announced even as the Consulate General started the process of mailing ballots to registered voters.

Consul General Calonge instructed the Special Board of Election Inspectors at the Consulate to conduct the Final Testing and Sealing of the Vote Counting Machines or VCMs April 7, in accordance with the Commission on Elections (COMELEC) guidelines on the Automated Election System (AES) with Modified Postal Voting (MPV).

Under this system, voters may participate in the electoral exercise either by mail or by personally casting their ballots at the Consulate. However, the Consulate General, realizing the practicality for most overseas voters to receive their ballots through mail, will no longer wait for a formal notice from the voters before sending the ballots to them in order to encourage greater participation.

Those who will receive their ballots and send them back through mail are advised to carefully follow the instructions enclosed in the envelope, as shown in a sample provided by COMELEC.

To make sure that their ballot is counted and not invalidated, voters should place it in the official return envelope, seal it using the official sticker seal and sign the envelope on the designated area.

In addition, all ballots must be received by the Consulate General not later than 4:00 a.m. Chicago time on May 9, coinciding with the close of voting in the Philippines on May 9 at 5:00 p.m.

Those who wish to personally pick up and cast their ballots are advised to inform the Consulate General as soon as possible; otherwise, their ballots will be mailed even before the earlier announced deadline of April 22.

Voters who received their ballots in the mail may also wish to personally deliver their ballots in properly sealed and signed official envelopes. They can also request to witness the “batch feeding” of mailed in ballots on Mondays and Thursdays, and cast their ballots during this process.

The Consulate General will further make available to the voters and the general public upon request copies of the presidential, vice-presidential and senatorial candidates’ profiles, as well as an enumeration of party list organizations vying for representation, provided by COMELEC.

The entire voting period runs for one month starting on April 9th. ConGen Calonge urged registered overseas voters to take advantage of this opportunity and to cast their votes early. Persons interested to volunteer as poll watchers are invited to call the local consulate.