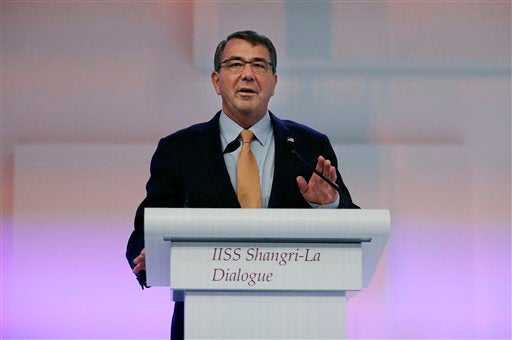 WASHINGTON— Defense Secretary Ash Carter says the United States will send about $40 million in military assistance to the Philippines to strengthen intelligence sharing, surveillance and naval patrols. The aid comes amid increasing tensions with China over undeveloped islands and shoals in the region.

READ: US hikes military aid to PH to $79M

Carter tells the Council on Foreign Relations that the aid will take the alliance to a new level. Officials recently announced that the U.S. will get access to five Philippine military bases to house American forces that will rotate in and out of the country for training and other missions.

Carter says he will visit two of those bases next week.

The new aid will include an enhanced information network for classified communications, sensors for patrol vessels and an unmanned aerostat reconnaissance airship.