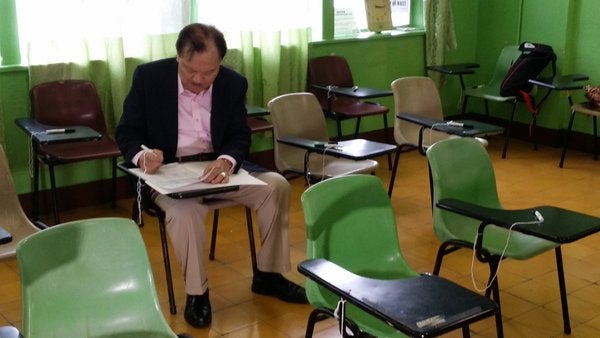 Lim, who registered so that he could vote here at the start of the overseas absentee voting (OAV), had already shaded his ballot before an election official informed him he was in the wrong precinct.

“This is an eye-opener that we should be vigilant,” Lim told reporters afterwards at the Bayanihan Centre in Kennedy Town, where the OAV here is being held.

Lim went to Precinct 10 after the voting started at 8 a.m. when he was actually listed in Precinct 6.

Lim said the special board of election inspectors at precinct 10 thought his middle name “Delubio” was his surname. There was apparently a voter with that surname in Precinct 10.

After being told that he was in the wrong precinct, his ballot was set aside and declared “spoiled.”

He went down one floor to Precinct 6 and there successfully cast his vote without a hitch.

There are around 90,000 registered Filipino voters in Hong Kong.