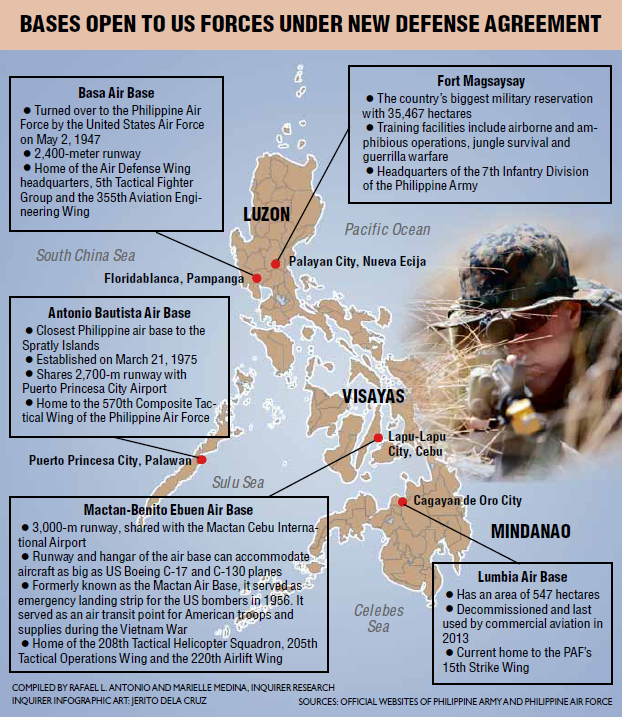 The Philippines and the United States on Saturday announced five locations where American forces will have access under the Enhanced Defense Cooperation Agreement (Edca), including one facing disputed islands in the South China Sea.

The announcement came after strategic talks in Washington, where the allies reiterated their opposition to militarization of outposts in the South China Sea, where six Asian countries have competing claims.

READ: US, Philippines agree on locations covered by defense pact

China has built artificial islands with airstrips and military facilities as it asserts its claim to virtually all of the South China Sea, including islands and reefs claimed by the Philippines, Brunei, Malaysia, Vietnam and Taiwan.

The two sides also announced the prospect of “significant” US funding for maritime security initiatives in the Philippines, support that comes as Manila pursues efforts to boost its external defense.

Ensuring strategic American presence in each of the Philippines’ island groups, Manila and Washington announced that they had agreed to use four air bases and one military reservation for deployment of US forces under the Edca.

One of the bases where US forces will have access is in Mindanao, where the United States is concerned about the presence of Muslim extremist groups.

The locations are at Antonio Bautista Air Base in Puerto Princesa, western Palawan, which faces the hotly contested Spratly islands in the South China Sea; Lumbia Air Base in Cagayan de Oro, southern Mindanao; Basa Air Base in Floridablanca, Pampanga province; Fort Magsaysay in Nueva Ecija province, used in joint Philippine-US military exercises, and Mactan-Benito Ebuen Air Base in Cebu.

Notably out of the list are the two former US bases in the Philippines: Clark Air Base in Pampanga and Subic Naval Base in Olongapo City, Zambales province, where US military ships dock every year on routine visits.

Subic is closest to Panatag Shoal (international name: Scarborough Shoal), 230 kilometers west of Zambales, where the United States has seen Chinese activity that could be a precursor to more land reclamation in the South China Sea.

China seized the shoal in 2012 after a two-month standoff between Chinese and Philippine vessels.

It was the incident that forced the Philippines to bring its territorial dispute with China to the United Nations Permanent Court of Arbitration in The Hague in January 2013, asking the tribunal to invalidate China’s claim to almost all of the 3.5-million-square-kilometer South China Sea.

Reporting the Chinese activity at Panatag Shoal on Thursday, Adm. John Richardson, head of US naval operations, expressed concern that a ruling on the case expected in coming weeks could trigger a Beijing decision to declare an exclusion zone in the South China Sea.

Richardson said the United States was weighing responses to such a move by China.

In a joint statement issued after the annual US-Philippine Strategic Dialogue in Washington, Washington and Manila called for restraint among parties in the South China Sea dispute, saying claims should be pursued in compliance with international law.

“Both sides expressed their firm opposition to the ongoing militarization of outposts in the South China Sea and discussed their common view that the installation of new military assets on the outposts escalates tensions,” the statement said, referring to China’s deployment of fighter jets, surface-to-air missiles and installation of radars on disputed islands and reefs in the strategic waterway.

The two sides also “discussed options to address further militarization and unilateral actions in the South China Sea,” it said.

They reiterated their stand that the ruling of the UN tribunal on the Philippine arbitration case against China “would be legally binding” on both claimants—an apparent call on Beijing to respect the legal process it has shunned, invoking instead “indisputable sovereignty” over the South China Sea.

During the dialogue held on March 17 and 18, the two sides discussed next steps for the implementation of the Edca.

The 10-year Edca was signed by US and Philippine officials in 2014, but it only got the green light in January after the Philippine Supreme Court ruled it was constitutional. It is a key part of the Obama administration effort to reassert US presence in Asia.

The deal would give the US military greater access to Philippine military bases through rotation of troops, ships and aircraft for humanitarian and maritime security operations.

The United States and the Philippines also “reaffirmed [their] shared commitment to strengthening [their] alliance, in terms of ensuring both countries’ mutual defense and security, as well as jointly contributing to regional peace, stability and economic prosperity,” the statement said.

“They committed to continue developing, planning and executing defense cooperation activities to reinforce their respective national defense capabilities and interoperability, in the areas of maritime security and domain awareness, enhanced joint activities, humanitarian and disaster response, counterterrorism, cybersecurity and information sharing,” it said.

Discussions also touched on funneling greater US aid to boost the capacity of the Philippine military, including modernizing the Armed Forces of the Philippines with specific focus on maritime security and speedy delivery of humanitarian assistance in times of disaster.

In particular, the US Department of Defense is planning to seek congressional funding for maritime-related projects in the Philippines, the statement said.

US Deputy Assistant Secretary of Defense Amy Searight said the Pentagon had told the US Congress of its intention to provide $50 million to help build regional maritime security.

She said the Philippines would get “the lion’s share” of the funds, which are expected to go toward improving radar and other South China Sea monitoring capabilities.

US Ambassador to the Philippines Philip Goldberg told reporters yesterday that movements of supplies and personnel to the base locations would take place “very soon.”

Goldberg described the Edca as “a pretty big deal” that would allow for a greater US presence as part of the US rebalance to Asia and enhance the alliance with the Philippines.

He stressed, however, that the agreement did not allow for permanent US bases that existed for 94 years until 1991, when the Philippine Senate voted to evict them.

“This isn’t a return to that era. These are different reasons and for 21st century issues, including maritime security,” Goldberg said, adding that all US deployments would require Philippine approval.

In a separate opinion issued with the Supreme Court ruling in favor of the Edca, Associate Justice Antonio Carpio, who is actively campaigning against China’s “creeping invasion” in the South China Sea, said the deal was essential in building “credible defense” for the Philippines and that it would give the country “a fighting chance” against the Chinese.

In a statement issued on Saturday, the militant group Bagong Alyansang Makabayan (Bayan), one of the petitioners that lost the case against the deal in the Supreme Court, called the selection of the five locations “a midnight deal” by President Aquino’s administration, saying the bases were chosen within his last few months in office.

“Aquino will go down in history as the President who brought back US bases to our shores. There will be strong resistance from the areas where these bases will be set up,” Bayan secretary general Renato Reyes said.

Bayan Muna Rep. Carlos Zarate called the selection of the five locations an “utter surrender of our national sovereignty.”

“President Aquino should be called to account for this,” Zarate said.

Kabataan Rep. Antonio Tinio said the agreement would be the most extensive military bases deal since World War II.

“Under the postwar military bases agreements, US military presence was confined mainly to Clark and Subic. Under the Edca, US forces will be hosted continuously (in the guise of ‘rotational presence’) in Luzon, Visayas and Mindanao,” he said.

Senatorial candidate Neri Colmenares said the deal was a cause for alarm, as it would make the Philippines a target for enemies of the United States.

“The most prudent way to deal with China is through the [UN] arbitral court and the help of the international community,” he said.

Brig. Gen. Restituto Padilla brushed aside the criticisms, citing the Supreme Court decision upholding the constitutionality of the Edca.

“The ruling of the Supreme Court speaks for itself: There is no violation of the Constitution. There are no new US bases being built,” Padilla said.

In Cagayan de Oro, Councilor Teodulfo Lao said he did not understand why the city was offered to American forces when it was not a strategic location in the defense of Philippine interests in the South China Sea.

He said allowing US forces to use Lumbia Air Base could have negative effects, such as the rise of prostitution in the city.

On the other hand, he said, the presence of US forces could boost the confidence of investors in the city.

Councilor Lourdes Darimbang said she opposed the plan because it could increase the security threat to the city.

But Mayor Oscar Moreno said he saw no problem with US use of Lumbia Air Base, home to the Philippine Air Force 15th Strike Wing.

He said the long-term benefit of US use of the base should be considered. With reports from Gil Cabacungan and Jaymee T. Gamil in Manila; Jigger Jerusalem, Inquirer Mindanao; AP

8 bases on table in Edca talks with US

US to step up South China Sea patrols