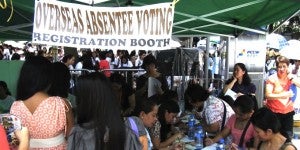 The emergence of this new class of voters now poised to flex its growing political muscle did not happen without growing pains.

There was great excitement among advocates and supporters of the political empowerment of overseas Filipinos when the absentee voting bill was finally passed into law in 2003. Section 2 of Article V of the 1987 Philippine Constitution clearly states that “Congress shall provide … a system for absentee voting by qualified Filipinos abroad.”

The long 15-year wait, which saw years of sporadic and disparate lobbying that ultimately set the stage for a more organized and relentless global push, finally came to an end.

The afterglow of political victory was not dampened even if only 364,187 overseas Filipinos actually registered to vote for the 2004 elections.

Comelec underestimated what it took to maximize registration, scheduling what in hindsight was a very short two-month registration period. That level of participation was quite low considering there were an estimated seven million overseas Filipinos at the time.

In addition, voter turnout was just 65 percent, much lower than the 75 percent turnout in the Philippines. But it was the first time the law was implemented, so there was a nice-first-try sense of accomplishment.

In a joint congressional oversight committee hearing to discuss the implementation of the law, Representative Teddy Locsin congratulated the Comelec and the Department of Foreign Affairs for “doing their best.”

The succeeding two elections saw a steady increase in the number of registered voters, but the numbers were still way below expectations. The 2006 registration campaign raised the total to 504,124 voters.

Worse, turnout in the 2007 elections plummeted to just 16 percent. Interest in that election year was expected to be less because it was not a presidential election, but the drop in turnout was alarmingly steep.

Some members of Congress threatened to cancel overseas voting considering the seeming lack of interest, but the threats were probably made mainly to prod all the stakeholders (Comelec, DFA, civil society, Filipino community leaders abroad and overseas Filipinos in general) to more deliberately and collaboratively help generate broader participation.

For the 2010 presidential elections, Comelec scheduled a 7-month registration period. The total number of registered voters, after purging lists of those who had not voted for two consecutive elections, was 589,830—just a slight increase from 2007.

Turnout was 26 percent, an improvement from 2007 but still very low. This was the election year when President Benigno Aquino was voted into office. He was leading in all polls by double digits, so the lack of serious competition did not help turn out the overseas vote.

Pulling out all stops

In 2013, total registered voters shot up to 975,263 (a 65-percent jump), partly the benefit of aiming high—the goal was one million. Comelec tried to pull out all stops to maximize voter registration.

A longer registration period was conducted from November 2, 2011 to October 31, 2012. Registration booths were set up at the OWWA, POEA and CFO offices, and even at various terminals at NAIA.

More diplomats were trained as voter registration officers. For Filipinos living too far from a Philippine consulate, mobile registration was made available. The information dissemination campaign was also much more aggressive. Philippine missions were more actively involved. NGOs, such as the Center for Migrant Advocacy, continued to help by bombarding overseas Filipinos with reminders to register.

In the U.S., where many Filipinos hold a green card, the infamous provision requiring those who want to vote to sign an affidavit signifying intent to return within two years was finally removed in 2013.

The provision had been inserted by legislators as a last-ditch compromise to neutralize key opposition to the bill. At the time, some members of Congress strongly believed that only contractual overseas Filipino workers (those in the Middle East or Hong Kong, for example) were entitled to vote, excluding those who have acquired permanent legal status in their host countries.

With four election cycles under their belt, the Comelec and DFA seem to have become more adept at orchestrating broader participation. The overseas voter registration campaign launched in 2015 upped the total number of registered voters to 1.38 million. That’s an impressive 42-percent jump from 2013.

Can the now 1.38 million-strong overseas Filipino voters be a deciding factor in the May national elections? If they were a province, overseas voters would make it to the list of the country’s top 10 vote-rich provinces, just under Rizal (ranked #8), which has 1.4 million voters, and ranking higher than Iloilo and Nueva Ecija with their 1.34 and 1.3 million voters, respectively.

Certainly, the overseas vote can be critical in close contests, which seem to characterize the current presidential, vice presidential and senate races. With the current field of presidential candidates, for instance, the last two Pulse Asia polls (conducted in the latter half of February) showed a statistical tie between Senator Grace Poe and Vice President Jejomar Binay, with Poe leading with 26 percent in both polls, and Binay trailing by just a percentage point or two. In the race for vice president, the last Pulse Asia survey showed Senators Chiz Escudero and Bongbong Marcos in a tie.

In the Senate race, where 12 seats are up for grabs, the overseas vote can be an even more significant factor. The difference between number 12 and number 13 in senatorial elections can be as small as 10,000 votes, as was actually the case between Roberto Biazon and Robert Barbers in 2004.

Overseas voters too can decisively vote for party-list groups, helping favored parties to reach the critical threshold, which is 2 percent of the national vote, to earn a seat in the House of Representatives.

Now that overseas absentee voters have reached a critical mass, the key for them to actually impact electoral outcomes is to raise voter turnout.

If in May it stays at a low 26 percent as in the 2010 presidential elections, or even lower at 16 percent as in 2007, then overseas voters may rightfully feel empowered when they cast their ballot, but their true influence will be greatly diminished.

Note to overseas Filipino voters: The Comelec’s Office for Overseas Voting, through Atty. Jane Valeza, urges you to cast your ballot. Voting starts on April 9 and continues until May 9. If there are any issues that might derail your ability to vote or if you have any other questions, please feel free to reach out to the Comelec. Atty. Valeza can be reached at 63 2 521 2952 and 63 2 522 2251 or via e-mail at [email protected]