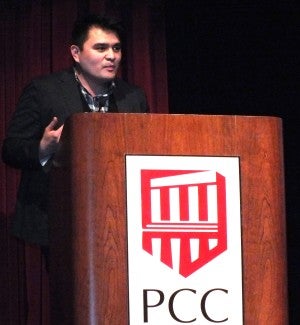 Vargas is the founder of Define American, a non-profit media and culture organization that seeks to promote such conversation. Additionally, last February, he launched #EmergingUS, a multimedia news platform focusing on race, immigration and the complexities of multiculturalism.

During his talk Vargas introduced the trailer of his newly released video aired on MTV, entitled “White People,” which he directed, on what it means to be young and white in America as part of the network’s “Look Different” campaign.

Vargas discovered his undocumented status at age 16, when he applied for a driver’s permit with, unknown to him, a fake green card, he decided to lie low, go to college and become a professional journalist.

He later “came out” both as a gay man and an undocumented person, to be a champion of other “undocumented Americans” who contribute to social security (over $100 billion in the past decade), pay income taxes, raise families, seek education, and live good honest lives.

Despite legal advice not to, Vargas published his own undocumented life story in 2011 in a New York Times article, and waited to be deported. It didn’t happen. He decided to call the U.S. Immigration and Customs Enforcement (ICE) and was told that they could not comment on his case.

Vargas came out again on the cover of Time Magazine June 14, 2012, but this time joined by the faces of other undocumented Americans of various backgrounds to show diversity among undocumented.

“When people say immigrants like us should earn our citizenship. What are all you doing to earn yours? As far as I’m concerned I’ve been trying to earn mine since I got here. Since I found out what was sacrificed for me to be here. And I hope in all of these conversations, about papers and laws and borders that we understand fully, the history of this country. And that what makes someone an American is not that just they were born here, or a law was decreed. American to me is the fight of wanting to be here. That is not just something that falls in your lap, that it’s something you fight for.”

At the question-and-answer session after his talk, two fellow “undocumented Americans” exposed themselves and “came out,” one a Chinese/Filipina dentist and another a student entrepreneur who runs his own online business who also identified himself as Filipino.

The event was sponsored by Pasadena City College’s Cross Cultural Center and Pathways.