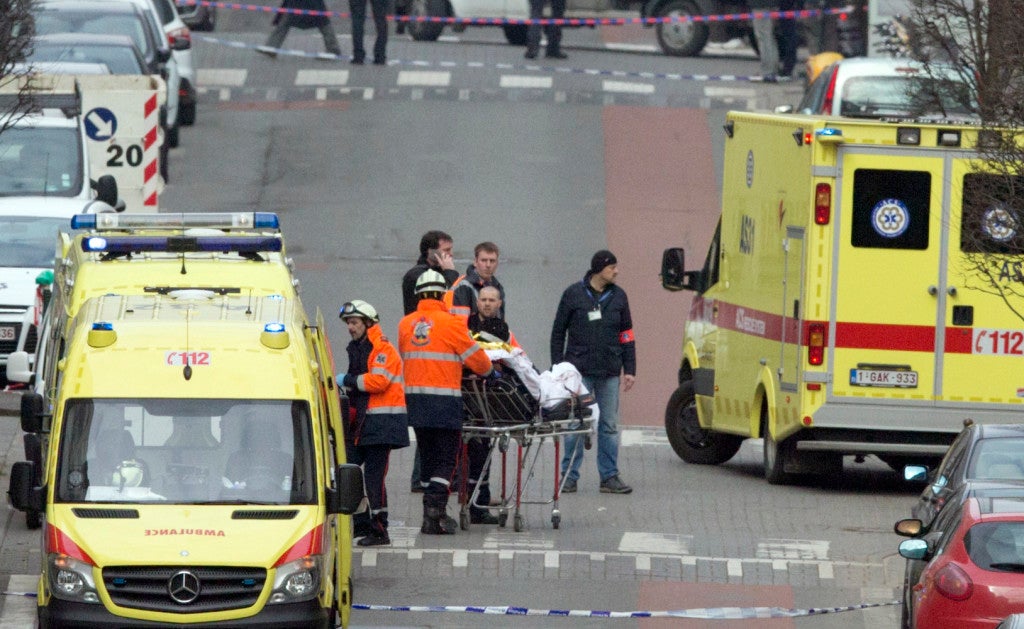 Emergency services evacuate a victim by stretcher after a explosion in a main metro station in Brussels on Tuesday, March 22, 2016. (AP Photo/Virginia Mayo)

No Filipino was reported injured or killed in a series of explosions that rocked Brussels Tuesday morning, Philippine Ambassador to Belgium and Luxembourg Victoria Bataclan told INQUIRER.net.

Bataclan said the Philippine embassy called the hospitals where the victims where brought and there were no Filipinos there.

“Expect police information before the day is over,” she added.

At least 13 people were killed while scores more were injured when twin blasts hit the airport and another bomb went off the city’s subway system near the European Union headquarters.

Bataclan, who is also the head of the Philippine Mission to the European Union, urged Filipinos in Belgium to “stay where they are.”

The explosions prompted authorities to lock down the Belgian capital. The European country was put on highest alert level, she said.

Arriving planes and trains in Brussels were diverted, the Associated Press reported.

Belgian Prime Minister Charles Michel described the explosions as terror attacks even as he said said there was no immediate evidence linking key Paris suspect Salah Abdeslam to them.

“He asked for solidarity in this hour of grief and fight against terrorism,” Bataclan said.

The attacks came just days after the 26-year-old  Abdeslam was arrested Friday in Brussels. After his arrest, he told authorities he had created a new network and was planning new attacks.

There was no immediate claim of responsibility for Tuesday’s attacks.

There are about 10,000 Filipinos in Belgium. (DAM with a report from AP)