‘Plight of OFWs unchanged since execution of Flor Contemplacion’ 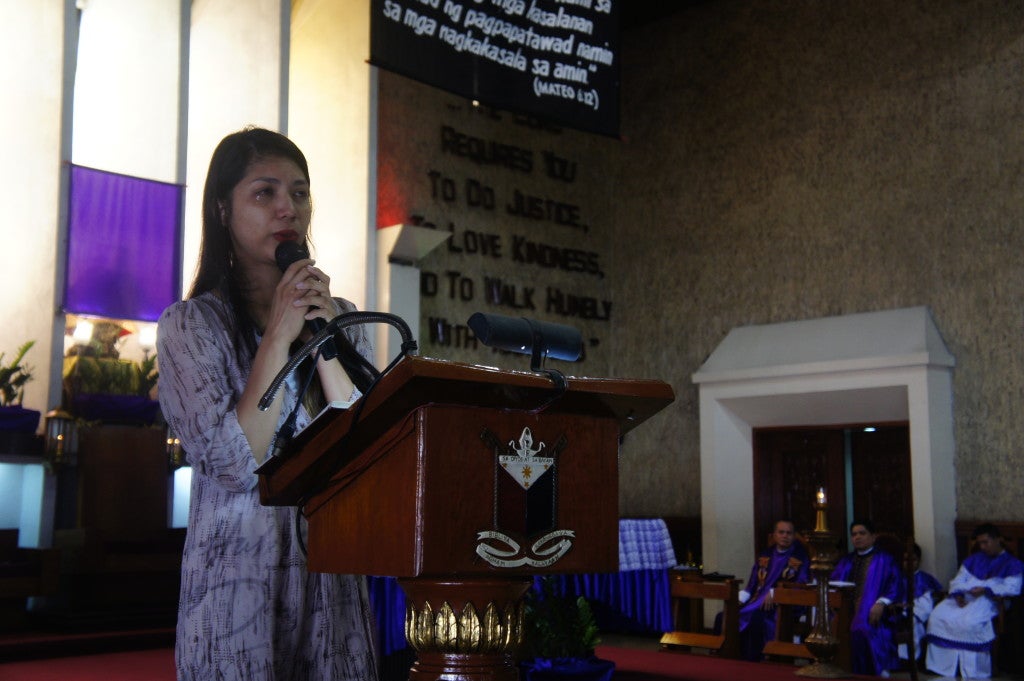 Human trafficking victim Shera Salva recounts the abuses she experienced as a domestic worker in Egypt during a homily at the National Cathedral of the Iglesia Filipina Independiente on March 13. VAUGHN ALVIAR

“I put her to sleep before I left.”

Single mother Shera Salva, 23, mustered these words while recounting on March 13 how she spent her last day in the Philippines with her months-old daughter.

She was recounting in between sobs in a homily at the National Cathedral of the Iglesia Filipina Independiente her ordeal after flying to Egypt in September as a victim of illegal recruitment and, the term she preferred, human trafficking.

Salva, a few days after she was repatriated on Feb. 29, stood on the pulpit for the Aglipayan Church’s observance of the 21st anniversary on March 17of the execution of Flor Contemplacion.

The administration, led by then President Fidel V. Ramos, was accused of not providing the necessary legal support for Contemplacion.

Shortly after the city-state carried out the execution, the OFW’s life was turned into a movie starring Nora Aunor, depicting the alleged torture carried out by Singapore authorities.

The National Cathedral reprinted a scathing statement from the 20th year of the Flor Contemplacion execution on its weekly publication, replacing the usual content of reflections and Bible readings.

The statement is a year old but the situation is still the same, according to IFI’s National Cathedral cannon, Very Rev. Julius Caesar Barrameda.

In the statement, the National Council of Churches in the Philippines said the situation had “largely unchanged.”

The NCCP is the largest non-Roman Catholic religious network in the country, to which the Aglipayan Church belongs.

“We see Flor in every Filipino leaving the country, which according to official estimates has reached a staggering 6,092 daily,” the NCCP said. ““Flor was one of the millions of Filipinos left with no choice but to work in a foreign land in order to provide a better life for their families back home.”

The number of Filipinos abroad is above 10 million, according to the Commission on Filipinos Overseas in a 2013 report.

The number includes three categories. To be permanent, like some five million, means to be a legal immigrant. To be temporary is to work temporarily with legal documents and to be irregular is to be there without proper documentation—over three million and one million, respectively. The proverbial “TNT” (tago ng tago), who extend their stay beyond the legal dates, and victims of human trafficking like Salva, are considered irregular.

“Overseas workers were left defenseless by the government, protected only by their tears and prayers,” the statement said, also noting the cases of exploitation in embassies and labor offices that grabbed headlines then.

Salva echoed the issue, throwing criticism at the government for the handling of her case.

She said she was asked by the Philippine embassy in Egypt to produce $5,000 to pay her employers when she first complained about her condition—an amount that she said was reduced to $2,000 and paid by the government before she was repatriated.

She also claimed to have signed a document to drop her police report of the abuse, meaning she wouldn’t press charges, “so I may be able to go home immediately, they told me.”

Salva’s harrowing experience began when a certain Edna came to their home in Barangay Holy Spirit, Quezon City, asking her if she wanted to work abroad.

“Someone knocked on our door and befriended my family,” she said. “She said she would help me work abroad, and I wouldn’t spend a single cent.”

Edna—and her boss, a certain Ma’am Anna—came at the right time, Salva said. “A few months after I gave birth to her, we couldn’t afford to buy her food and milk. I’d be lucky to see coins, even just P50, in my mother’s wallet.”

Her brother had also died after a costly fight with a sickness, depleting their savings, and her father brought in only a small income from his work.

“We were sinking in debt … I was thinking how to give my baby a life. So, I was very happy to work abroad,” she said. It was her first plane ride.

Little did she know, direct employment was a problematic way of being hired abroad. Because of this, a person is lured to a job, usually fast and with no fees, but lacking in proper documentation.

The promise was lofty: Be a waitress in Dubai, earn $400 monthly. She was surprised then that she became a domestic helper in Egypt, her salary at $250.

The United Arab Emirates, where Dubai is a major city, is third to the United States and Saudi Arabia in the Commission on Filipinos Overseas’ listing of top destinations for Filipinos in a 2013 estimate. Qatar, also in the region, is ninth on the list.

Egypt, meanwhile, had only 300-plus land-based OFWs, said a 2014 report by the Philippine Overseas Employment Administration, the only mention of the country in the report.

She decided to stick it out with that situation at first, clinging still to her hopes to give her baby and parents a better life.

“I had to ask for them to send my parents my salary three months into my employment, because they needed the money badly back home,” she said. “They did send it, but they began being harsh to me.”

They would leave her without food, scold her for not doing her job well enough, lock her up in a room and have her sleep outside, she said. “They would be out of town for weeks, months, and I would be left without salary.”

The hardest part was withholding her situation from her parents: “I kept saying, ‘Oo, OK lang ako,’ even if I was eating old, hard bread.”

With her situation getting worse, she finally relented. She sent a text message to her parents revealing she was being maltreated—although, until now, she still could not tell them about some specifics of it.

She also sought the embassy, she said, but they only visited her employers’ home to help them “make peace.” They also notified her that she had to produce $5,000 for her release from her contract, which she just could not afford.

After that visit, the couple that employed her took her cell phone from her.

Her parents, worried, sought help and found themselves at the doorsteps of Migrante International. The group worked for the speedy processing of her case.

For Salva, signing the document may have ended her claim to her delayed salary and other forms of redress, but it was still a long fight for other OFWs worldwide, said Earl John Pastor, the Migrante coordinator for Quezon City.

Pastor said they were now handling over 100 cases, with the number increasing rapidly. The 6,092 daily departures alone, Migrante said, was a huge jump from the 4,030 when President Benigno Aquino III took office.

“We get so many reports of abuse. If Shera is made to sleep outside their home, many others are even sexually abused, especially women,” he said. Migrante, citing a 2012 report, said some 55 percent of OFWs were females.

Pastor claimed the numbers were growing because of poverty and unemployment in combination with the country’s labor export policy, which geared Filipinos for work abroad.

Migrante is putting a special focus on the Middle East. Pastor said OFWs were being fired or paid less because of the low price of oil, or receiving their salaries in an “ATM”—after three months—basis, even for longer intervals. He also touched on an about-face for foreign labor, particularly with Saudi Arabia’s Saudization.

On the Flor Contemplacion case, Migrante held commemoration rites in her Laguna hometown of San Pablo. They held her case as a reminder of a glaring economic problem in the country, said Pastor.

“They are a few of thousands upon thousands of cases for migrants everywhere in the world, not only for Filipinos but for every other person suffering poverty, being displaced, moving for a better life,” said Barrameda.

“Sometimes what you think is greener pasture is not green at all,” he said. “Some don’t get what they expect. Think also about the months, years OFWs spend away from their families.”

“People would expect you to bring home chocolates and shirts but I came home only with myself,” said Salva. “I’ve made big mistakes in my life, at one point thinking what happened to me in Egypt was my punishment, but I hope I become a lesson to all of you.”

She said her trauma was gone and that she was now ready to apply for a job—maybe even outside the country as long as through a better process—but her first order of business had been to catch up with her daughter who hadn’t quite warmed up to her yet.

“I’m not yet the one putting her to sleep, but I hope I can do that soon.” RC