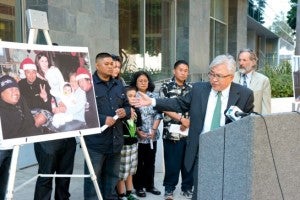 At around 10:00 pm on December 14, 2015, Saycon was seated at the front of Looff’s Lite-A-Line gaming arcade, reportedly holding a three-inch-blade pocketknife and playing with it, witnesses said. He was a regular at the gaming casino, known and described by management as “friendly, quiet, unassuming.”

Earlier in the evening, Saycon had been asked by a Looff’s employee to put away his knife, which he had been scratching on a table. He complied and was sitting down “peacefully,” according to reports.

The incident escalated when law enforcement arrived, as requested by Looff’s employees, to help escort Saycon—who was described as “agitated,” “not himself,” and “out of it”—from the premises and assist him securing mental health treatment.

“Even though Mharloun was never violent or threatening, [the employees] requested him to be escorted. When police arrived, he was seated quietly out of reach from those in the casino, but police immediately escalated the situation,” said the Saycon family’s lawyer, Attorney Joe Sayas. “First, they hit him with a Taser. The they attacked him with a baton. And then, although Mharloun was not fighting back, they fired a gun and shot him, multiple times.”

According to the lawyer, Mharloun Saycon was shot eight times in the chest, arm, and abdomen. He was pronounced dead at the scene.

“This was brute violence, and use of vicious force by law enforcement, “ said the family’s representative, Attorney Dan Stormer from civil rights firm Hadsell, Stormer, & Renick, LLP. “Mharloun was killed without any provocation, any actions on his part, in a malicious, despicable fashion.”

“We really can’t believe that this happened. We always just watch it on the news, like wow another person shot by the police. It’s hard…and the reality is, we can’t avoid this. It was a big loss for us. He was a good, smart kid,” said his father, Khanly Saycon.

“We came home, found a paper on the door—there was a coroner’s investigation. It was our worst nightmare come true: my son is not coming home.”

Mharloun Saycon, was born in the Philippines and came to the U.S. in 1985. In his early 20s, he suffered a mental disability, which developed shortly after he graduated from Santa Monica College. He was diagnosed with bipolar schizophrenia and was taking medication for mental imbalances.

“It affected our family hard,” said Saycon’s younger brother, Khanly Saycon II. “Growing up, Mharloun was the good one. When I started going down the wrong path in high school, he showed me the way. He protected me.”

The Saycon family has filed a notice of tort claim against the Long Beach Police Department through their attorneys, and has begun the months-long process of filing a $20 million civil lawsuit.

“This is another day of sadness. We make a demand for justice for Mharloun and his soul. We want the District Attorney to prosecute and charge these thugs, and stop covering it up. We demand compensation,” Stormer said. “What this county needs is an investigation into the brutal killings.”

According to Stormer, roughly one-third to one-half of victims shot by police are mentally ill.

“There was never a moment’s hesitation where they tried to figure out what to do that resulted in brutal violence,” Stormer added. “We have attempted to get the 9-1-1 call, which is often used to show someone is a problem or a threat, but the [Long Beach Police] Department refuses to release it. They are hiding the facts. They have not even interviewed the witnesses who saw this murder nearly 3 months ago. Their reason is that they ‘anticipate litigation”.”

Despite Thursday’s press conference being held in front of its headquarters, the Long Beach Police Department was not present nor did they provide comment.

“This scenario could have been avoided in so many different ways,” added Saycon’s brother, Khanly. “No family should ever have to go through what we have. We want changes in how the police treat the mentally ill.”

Saycon’s mother, Anna Luz Saycon, emotionally pleaded for the violence to stop, and for proper justice for her late son, whom she described as “kind, gentle, and obedient.”

“Every day he picked me up at the bus stop, and we spent time together,” she said, through tears. “He lived at home and he took care of me. He was a wonderful son. He didn’t deserve this.”

Although Saycon suffered from a severe disability, he lived a healthy and normal lifestyle and worked at Pepperdine University, managing their sporting facility. His family said he was able to get regular treatment for his schizophrenia, and was very active, visiting a R.O.A.D.S. rehab/mental health center in Compton, California, several times a week, playing sports including baseball and basketball, cooking, and drawing cartoons.

Family representative Atty. Joe Sayas commented, “This is a heartbreaking loss. When [police] came, with their guns drawn, they did not attempt to find out what’s going on. The level of force was clearly excessive. Mharloun, a quiet and unassuming fellow, may have exhibited signs of mental illness but he was not violent or responsive. The biter irony is that Mharloun had every reason to believe that the police would help him, as he had been assisted in seeking care by police in the past. Now the Saycon family has lost a son, a brother, and an uncle.”

“[This incident] happened to a Filipino parent. The community should take a stand, knowing that it can happen to everyone, to every race,” Sayas continued. “We all should stand as Americans, stop the killings, stop this abusive exercise of power. Police officers should be more vigilant and better trained, should try to engage the mentally disabled, and find out how this can be stopped. Human lives are precious. Stop the violence.”

A report from the Ruderman Foundation noted that disability is “the missing word in media coverage of police violence.”