Tagalog helpline set up for Filipinos in Los Angeles 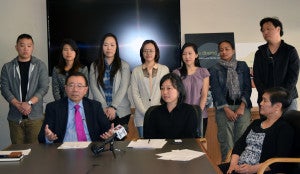 Asian Americans Advancing Justice-La President and Executive Director Stewart Kwoh (seated center) meets with the media and his staff at the launching of its Tagalog-language helpline.

In a press conference March 16, Kwoh said that while most Filipino immigrants speak English, many nuances of the language and culture still pose barriers to their acculturation process in America.

Kwoh’s agency has been actively involved in important lawsuits fighting for the rights of Filipino Americans. In 2012 it won a lawsuit on behalf of 69 Filipino American employees of Delano Regional Medical Center (Aldon) in what has been reported as the largest settlement for a workplace discrimination in the US. The lawsuit settled for $975,000.

The employees, mostly nurses were prohibited from speaking Tagalog and other Filipino languages under a broad-reaching English-only rule policy that was selectively applied to them.

Kwoh continued that there are more Filipino Americans living in Los Angeles County than in any other county in the United States, and 63 percent of the 374,285 are foreign-born.

Citizenship assistance will be one of the top priorities of the new helpline. A 2015 report from the Center for Migration Studies estimates that 85,000 Filipinos in Los Angeles County are eligible for naturalization.

Many are not aware about accessing services and will suffer in silence rather than seek help,” Kwoh stated.

The Tagalog helpline, which is part of Advancing Justice – LA’s Asian Language Legal Intake Project (ALLIP), will allow Tagalog-speaking individuals seeking assistance to speak with an AJ – LA community advocate in their native language. Callers will also be able to receive assistance in the Hiligaynon and Cebuano.

Advancing Justice – LA has hired a full-time legal advocate to assist callers to the Tagalog helpline. Jeanette Sayno is fluent in Tagalog, as well as the Hiligaynon and Cebuano. Sayno will assist Advancing Justice – LA attorneys in providing services and representation to members of the Filipino community with legal issues.

Sayno said her agency is actively working with the Office of LA Mayor Eric Garcetti to do outreach in the large community of Filipino Americans in the city.

The toll-free Tagalog helpline telephone number is (855) 300-2552. The Tagalog helpline is generally staffed from 8:30 a.m. to 3:30 p.m., Monday through Friday. Callers will be able to reach helpline staff or to leave a voicemail message. When they are unable to speak with a live helpline staff member, callers are encouraged to leave a voicemail message including their name and contact information for prompt follow up.