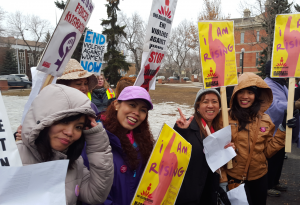 Members of Kabisig Society of Fort Saskatchewan march with other women and their supporters in Alberta to celebrate International Women’s Day. PHOTOS BY JHONG DE LA CRUZ

EDMONTON, Alberta – Filipina migrants are reminding Philippine candidates that their votes count and that they will use them to back candidates who uphold women’s agenda.

About 100 women and their supporters marched in the streets of this city on Sunday, two days ahead in commemoration of the International Women’s Day, and some 40 Filipinos joined them.

“We are here to rise with other women in Alberta, we are here to rise for migrant women’s rights!” shouted Clarizze Truscott to the marching crowd. She is the Filipina Canadian president of Kabisig Society from Fort Saskatchewan, a town 25 km northeast of Edmonton.

Truscott lamented that the lack of services for Filipino compatriots has resulted in their apathy when it comes to electing Philippine candidates.

“Voters really need to reflect and understand who they’re really voting for,” she said, citing as example elected showbiz personalities who take seats in the government without track records.

“There are certain candidates like Duterte who appear and claim to be different from the rest and have shown great popularity on social media. But social media is never a real reflection of voter turnout,” she added.

“A huge source of income for the Philippines is OFW remittances. People should be reflective and vote for candidates who will serve OFW interests and who will provide them with protections and support…not just lip service as we’ve seen so many do,” said Truscott.

Data from Statistics Canada showed the number of Filipino women belonging to visible minorities in Canada at over 340,000 in 2011. Nine percent of this number are mostly foreign workers, most with no permanent resident status.

Merryn Edwards, one of the march and rally organizers, noted that Filipina migrant groups like the Kabisig Society, have shaped the political landscape for women in Alberta.

“It was Filipino women who helped me [with] my political education,” she said. Edwards was an organizer for a grassroots women’s group in Vancouver where she had met Filipino women espousing migrant advocacies.

“I was active in a women’s group that looked at a lot at issues of women equality here in Canada including child care for example. We could see that the only de facto child care program available in Canada was the live-in caregiver program, all it does is to transfer the burden for that work on to the back of third world migrant women,” Edwards said.

“When you create a second class of workers and deny certain rights, access to services and freedoms, that is injury to all workers…that is a basis that we could all come together on a day like International Women’s Day,” she added.

“Extended periods of family separation is one of the biggest impacts of the feminization of migration. In order to support their families, many women leave their partners and their children behind to find work abroad,” she said. 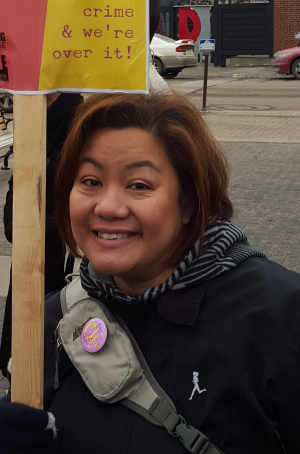 Kabisig Society’s Clarizze Truscott poses for a photo at Women’s March in Edmonton.

Years of separation create wide gaps when families finally reunite, she said. “Many families have to go through a long period of readjustment, of getting to know each other, after years living apart,” she said.

Tungohan, who teaches at the University of Alberta’s Political Science Department, wrote From the Politics of Everyday Resistance to the Politics from Below, which won the 2014 First Prize under National Women’s Studies Association.

Since completing a study she co-authored in 2014, which examined the experiences of Filipina live-in caregivers, Tungohan noted that the situation of caregivers has worsened.

In December 2014, the federal government overhauled the Live-in Caregiver Program with major changes in the path to permanent status: a 5,000 cap in yearly applications for permanent status, a difficult language test and the removal of the “live-in” requirement for caregivers.

Tungohan cited the case of caregivers Luvvy Alicbusan and Karen Talosig, who completed all of the requirements of the caregiver program but whose applications for permanent residency were denied because of “medical inadmissibility.” Alicbusan has a son who has autism spectrum disorder while Talosig’s daughter is deaf.