Tit for tat, US warns China 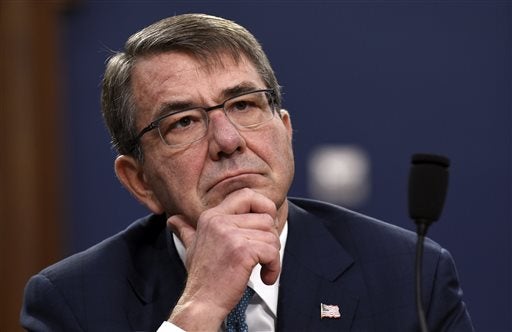 SAN FRANCISCO—US Defense Secretary Ash Carter has warned China against “aggressive” actions in the South China Sea region, including the placement of surface-to-air missiles on a disputed island.

“China must not pursue militarization in the South China Sea,” Carter said in a wide-ranging speech on Tuesday at the Commonwealth Club in San Francisco. “Specific actions will have specific consequences.”

Asked what the consequences could be, Carter told reporters the US military was already increasing deployments to the Asia-Pacific region and would spend $425 million through 2020 to pay for more exercises and training with countries in the region that were unnerved by China’s actions.

Carter’s warning coincided with a news report in Manila that China had stationed up to five ships around a Philippine-claimed atoll in the South China Sea, preventing Filipino fishermen from accessing traditional fishing grounds.

Eugenio Bito-onon Jr., the mayor of the Kalayaan region in the Spratly Islands, said on Tuesday the Chinese ships had been based at the uninhabited Quirino Atoll (international name: Jackson Atoll) for more than a month. “They have many ships there,” he said.

In Beijing, China admitted on Wednesday it had sent vessels to the disputed atoll to tow a grounded ship but added these vessels had since left the waters.

“The department has received an initial report from our defense authorities that two weeks ago, Chinese Coast Guard vessels were sighted at Quirino Atoll and that there are no more sightings of Chinese vessels in the area as of today,” Del Rosario told reporters.

The Armed Forces of the Philippines’ Western Command (Wescom), which guards the West Philippine Sea, denied that Chinese forces had over the Quirino Atoll. “Not accurate, not true,” said the Wescom chief, Vice Adm. Alexander Lopez.

Lopez said Filipino fishermen were spotted near Quirino Atoll when Wescom conducted a flyover on Feb. 24.

Even so, Del Rosario called on China “to exercise restraint in its conduct of activities that could complicate disputes in the South China Sea, and affect peace and stability in the region.”

In his speech, Carter said China’s aggressive behavior in the South China Sea had fueled trilateral agreements that would have been “unthinkable” even a few years ago.

The United States has carried out several freedom of navigation exercises in the South China Sea in recent months, sailing near disputed islands to underscore its rights to navigate the seas.

US Navy officials have said they plan to conduct more and increasingly complex exercises in the future.

Carter said the Pentagon also planned to spend over $8 billion in fiscal 2017 alone to expand its fleet of powerful submarines and undersea drones.

“There is no question that there are consequences for these actions,” Carter said. “We have plans in all three of these categories. You’ll see them unfolding.”

Carter underscored the US military’s determination to safeguard maritime security around the world, and particularly in the South China Sea region, which sees about 30 percent of the world’s trade transit its waters each year.

Carter also cited US concerns about Chinese and Russian efforts to develop antisatellite weapons that could destroy critical US national security satellites, citing China’s 2007 antisatellite test that created over 3,000 pieces of debris.

China claims almost the entire South China Sea, believed to have large deposits of oil and gas. Brunei, Malaysia, the Philippines, Taiwan and Vietnam also have claims on the waters, through which about $5 trillion in trade is shipped every year.

The Philippines is awaiting a ruling by an arbitration court in The Hague on its territorial dispute with China.

READ: Part of West PH Sea has long been ours, says Aquino

Tensions have been building recently, with the United States and others protesting against Beijing’s land reclamations on islands and reefs, and the recent deployment of surface-to-air missiles and fighter jets in the Paracel Islands.

Beijing, for its part, has been angered by freedom of navigation patrols on air and sea that the United States has conducted near the islands China claims in the South China Sea. Reports Niña P. Calleja and Jaymee T. Gamil