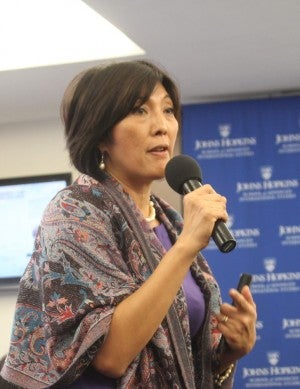 Evelina Galang responds to a question during a panel discussion. PHOTOS BY JON MELEGRITO

WASHINGTON, D.C. — “Among the 200,000 women and girls systematically abducted and forced to serve in Japanese military sex slave camps during WW11, about 1,000 were Filipina,” writer and activist M. Evelina Galang declared at a conference on “comfort women,” held here on Tuesday, March 1.

“Comfort Women” is a term for sex slaves used by the Japanese military during World War II.

“Of those women, 174 Filipinas have come forward,” asserted Galang, who personally met 40 them when she went to the Philippines in 1998. She has since interviewed 15 of the women for her forthcoming book, Lolas’ House: Women Living With War.

“My role as a writer is to share their stories, because they teach us something about humanity and how we treat one another, so it doesn’t happen again,” she pointed out.

Galang’s 2014 novel, Angel de La Luna and the 5th Glorious Mystery, incorporates this subject, which she has worked on passionately for more than a decade.

Attended by more than 70 activists and advocates, scholars and students and policy makers, the six-hour discussion on “Unfinished Apologies: Imperial Japan’s Sex Slaves of Wartime Asia,” was co-sponsored by the US-Korea Institute at the School of Advanced International Studies (SAIS) and Asia Policy Point. 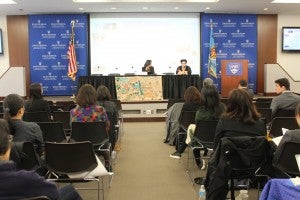 Activists, advocates, scholars, students and policy makers listen to the conference moderator call for more public education and strong collaboration by advocates to achieve justice for victims of sexual slavery.

Galang was among the panelists, which included researchers, professors and investigative journalists from different parts of the world. They provided an overview of how the system of sex slavery came to be and how it was managed. They also discussed new research on the non-Korean Comfort Women and contemporary understandings of conflict resolution and violence against women in warfare settings.

“The issue of comfort women has yet to be resolved fully,” said Jae Ku, director of the US-Korea Institute, in his opening remarks. “It’s still a modern tragedy and a human rights crisis.”

Recalling that the governments of Japan and South Korea reached an agreement in December 2015 over this “thorny historical issue,” Ku suggested that it cannot be resolved bilaterally because the victims were not all Korean women.

Historical documents put the total figure of “comfort women” at about 400,000 in comfort stations scattered all over Asia. Women, aged 14 to 30, from China, East Timor, Indonesia, Malaysia, the Netherlands, Philippines and Taiwan were also forced to become military slaves.

“Next to genocide, sexual slavery is the other crime from hell,” said Mindy Kotler, director of Asia Policy Point. “That’s why it’s important to record their history, to explore who they were and what they experienced. And through active remembering, we will help restore their dignity and humanity.”

Galang, author and professor of English and sirector of Creative Writing at the University of Miami, devoted most of her presentation to recounting some of the stories of the women she interviewed. Since 1998, she has studied the lives of surviving Filipina “comfort women,” who are members of Liga ng mga Lolang Pilipina (LILA Pilipina). 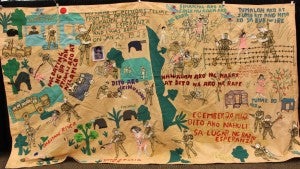 Prominently displayed on stage during the conference is a quilt made by Remedios Felias, which depicts her personal story as a ‘comfort woman’ during the Japanese occupation of the Philippines.

One of them is Catalina Lorenzo, who lived with her family on a mountainside in Mindanao. Galang shared her story: “One night, while cooking, she heard the Japanese soldiers approaching. Her husband took their baby and hid in the bark of a nearby tree. When the soldiers asked her where her husband was, she told them she didn’t have a husband. They didn’t believe her. They raped and took her to a garrison. When the war was over, her husband would not take her back. A local doctor shamed him and told him it was not her fault. So her husband handed the child to Catalina, but he never showed her affection after that.”

Galang also shared the story of Virgina Villarma, who was only 14 years old when she was raped by Japanese soldiers: “Virginia was searching for food when a jeep of five Japanese soldiers stopped. She ran but they came after her. When they caught her, they held her hands down. They pulled her hair. They jabbed her back with their bayonets. They hauled her onto the jeep like a pig bound for market. They drove her to what is now the customs’ house. There, the Japanese soldiers put her in a room with many other prisoners, undressed her and held her at gun point. They raped her repeatedly for three months. Until one day, there was a riot and she escaped.”

Most of the Filipinas who were forced into sex slavery by the Japanese Imperial Army went on to live full lives, Galang noted. “Some married and bore many children. Others became vendors or maids, wives of mayors, teachers in classrooms. Still, there were the ones who would go mad and never recover. By the time the women began their campaign for justice, they had grown so old, that the people called them lolas, the Tagalog word for grannies. The stories poured out of the lolas like water from a dam. Horrific testimonies of habitual rape and torture.” 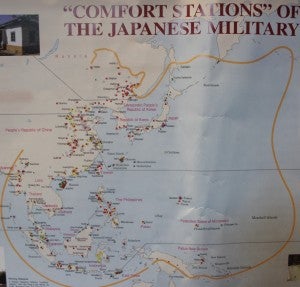 Galang is critical of President Benigno Aquino for not raising the issue of Japan’s responsibility during the Emperor’s visit to the Philippines last year. “Like all other victims of sexual slavery during the war, Filipina women are demanding an official apology from Japan, an acknowledgement of what they did to these women, and fair compensation for what they went through,” Galang said. “That’s the only way to honor their humanity.”

Organized between 1941-1945 by the Japanese military in occupied countries, there were more than 5,000 locations throughout Asia where women were forced into prostitution to “comfort” military personnel. A map showing where all the comfort stations were located was projected on two big screens throughout the conference.

Although these women were all victims of sexual exploitation, not all of them experienced the same treatment, however. “That’s what I learned in this conference for the first time,” says Galang.

“In other places where women were coerced into sexual servitude, the soldiers were at least required to wear condoms. And curtains partitioned these brothels into private spaces. But this was not the case in the Philippines, where women and young girls were abducted, taken to an abandoned church, raped and then just dumped like trash afterwards,” Galang added.

This typically happens in guerilla-infested towns and barrios in the Philippines where Japanese soldiers set up command posts for two to four months, said Larry Niksch of the Congressional Research Service, who offered this observation during the open forum. “They pick up these women and take turns raping them.”

In her keynote address, Taina Bien-Aime, executive director of the Coalition Against Trafficking in Women (CATW), talked about “Women in Warfare, How Far Have We come?” She stressed the need to stop the Japanese government from “historical revisionism” by “attempting to remove from U.S. history textbooks any mention of state-sponsored sexual slavery and comfort women.

“We cannot let their stories die. Theirs is a human story. If you knew that humanity was removed from these women and young girls, you will have to do something. We have a responsibility to make sure this does not happen again.” 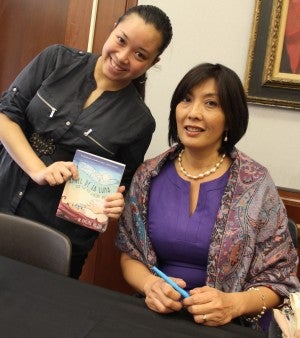 She concluded: “The Japanese government must take full responsibility and acknowledge the brutal coercion and human rights violation, issue an official apology and compensate fully all the victims and survivors. We cannot lose hope and resolve that justice is served.”

Among the students who attended the conference was Karlene Kay Chi, 25, a philosophy graduate student at American University, who grew up learning both Filipino and Chinese culture and history.  As a Filipina-Chinese American, she feels compelled to learn more about Filipino history, including the stories of the Filipina Comfort women.

The whole issue is “disturbing and upsetting,” she says. “As part of the millennial generation, we have a mission to raise awareness and remind people of the importance and pertinence of this issue. It sets a precedent for other things. If we don’t learn from history, we’ll be condemned to repeat it.”

After hearing accounts from Galang of Filipino victims, Chi said “It’s so refreshing to hear they are people, and not just policy ideas. Their stories are so relatable, horrifying, ghastly, sad, frustrating. I want to keep their heritage alive.”