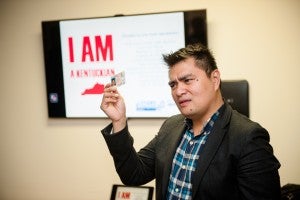 Jose Antonio Vargas is trying to raise $1million for his new online news site on immigration, race and identity.

NEW YORK, NY — Undocumented immigrant activist Jose Antonio Vargas was in Florida, on a recent Friday. Then three days later, he was on his way to Georgia, and soon to Wyoming.

Vargas, a journalist who rose to prominence after he came out as an undocumented immigrant in a New York Times Magazine essay in 2011, says he practically lives in airplanes, hopping from one state to another.

The reason? He is trying to raise $1 million in 60 days for his new venture #EmergingUS, an innovative video-driven digital news site that explores the intersection of immigration, race and identity in the United States.

“#EmergingUS is a corrective,” he said. “It is correcting the mainstream media’s failure to really cover this demographic earthquake that we, as a country, are going through — with aftershocks everywhere.”

Vargas, 35, believes that the national media do not fully capture what the true picture of America is and what will it be in the future, culturally, racially or politically.

He hopes that his new media outlet would fill that void.

“This is the time that our population has grown more Latino and more Asian, with Asian people being the fastest immigrant group in this country — documented and undocumented,” he said. 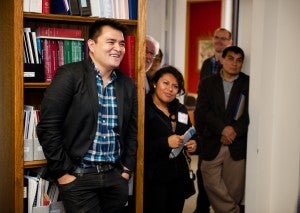 Vargas in one of his public appearances,

“But I think the media, when they talk about us, there’s kind of almost have one dimension, and we’re lucky if we get a few dimensions on the story. So, we don’t really get the richness of our experience,” he added.

Even by just watching this year’s election coverage, according to Vargas, he feels as if Asian people didn’t even exist.

“They talk about the Latino vote, the black vote, but not the Asian vote,” he added. But the country that has been predominantly black and white is now going to talk about issues that are not black and white; it is going to be the fundamental issue of American identity.”

#EmergingUS was originally a joint venture between Vargas and the Los Angeles Times, at a time when the paper was trying to find new ways to experiment with digital initiatives.

After meeting in 2015 with then-Los Angeles Times publisher and chief executive Austin Beutner, Vargas started #EmergingUS in the Times newsroom.

But Beutner was fired last September. Then the Times and Vargas agreed to transfer the assets developed for #EmergingUS to his company so that he may pursue the project independently.

Now partnering with Beacon, the journalism crowdfunding platform that helps raise funds for journalists around the world, Vargas needs to reach the $500,000 goal in two months in order to get Beacon’s matching funds.

“Jose’s tireless immigration reporting has earned him the trust of readers and lawmakers alike, and has already sparked a national conversation about identity,” said Dmitri Cherniak, co-founder of Beacon. “We’re excited to see what happens when he has the resources to broaden his purview even further.”

Vargas, as the publisher and editor, launched #EmergingUS on February 18.

Relying mainly on donations from its readers and supporters, he and his current team of six have already received almost $65,000— a big achievement in the past 24 hours since the launch.

According to Vargas, most of the donors are individuals supporting the site. Some of them gave $5, he added, while others donated as high as $1,000.

“This is something that has never been done in American journalism—that is, to raise a million dollars from the crowd, so we’re very excited about being able to do that,” he said.

As a for-profit company, Vargas admits that #EmergingUS needs to be “economically sustainable” to carry out its operations. He says that, in the long run, his company will rely on “the mixture of readers’ support, advertising, sponsorship, live events and all that [to] build an actual business model.”

A former reporter at the Washington Post, Vargas was part of its Pulitzer Prize-winning team that covered the Virginia Tech shooting massacre in 2007.

He landed on the cover of Time Magazine in 2012, telling his story as a 12-year-old boy arriving in the U.S. from the Philippines and now a public figure without legal status but considers himself American.

With his voice and influence, he could have championed stories about other Filipino undocumented immigrants in the United States—something that Filipino critics say he had almost never done in the community, particularly in the time when Filipinos have the lowest number of applicants for DACA (Deferred Action for Childhood Arrivals) as compared to other Asian groups.

According to Vargas, he has helped the Filipino community, including a relief operation for the Filipino victims of Typhoon Haiyan. 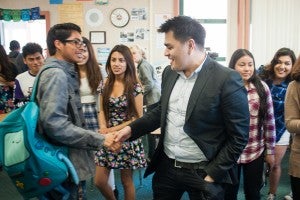 He says that he also supported Rob Bonta, the first California’s Filipino American assemblyman, to push Filipinos and other Asian immigrants to get their driver’s license, after the historic legislation that allows undocumented residents to apply for a driver’s license in California.

“I would say that I’m proud to be the first [undocumented] Filipino to get a driver’s license,” he said.

Vargas does not want to be revered as a celebrity.

“I kind of realize early on, in this journey, that I don’t want to be put in a celebrity thing, especially among Filipinos. Because what do people do? They put you up in some sort of a pedestal and then knock you down. I’m not interested in that.”

Not just an “immigration guy”

While he has become a public figure for immigration reform, Vargas adds that his work in recent years has formed him to become the voice for other American issues that relate to race, culture and identity.

“I have been traveling nonstop, and I have argued that what I have been doing is journalism. #EmergingUS is kind of the evolution of my own career as a journalist,” he said. “It is important that there’s been a way for me to insist on my own career, and that I am not only an ‘immigration guy.’”

Over the last five years, he says that he has done more than 450 events in 45 states, and he has visited more than 210 college campuses.

“People don’t walk around thinking, ‘Oh, that’s an immigration thing.’ Or, ‘Oh, that’s an Asian thing. Oh, that’s a gay thing. I walk around with all those three things intact all the time,’” he said. “These issues are connected—and that’s what #EmergingUS content is going to focus on, with the complexities of our identity.”