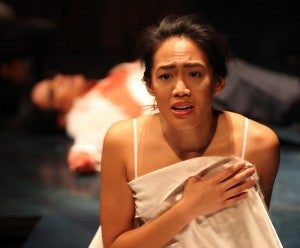 SAN FRANCISCO–To mount on stage a story based on history as tumultuous as that of the Philippines, centered on an infamous dictatorship that ended in a revolution on February 25, 1986, can be quite the challenge.

Adapted from a seminal and complex novel set in the Philippines, the play presents a blend of characters–drag queens, beauty queens, movie stars, statesmen, activists and rebels–in an assortment of scenes that make up a history, as if accessing random memories that were long forgotten or blocked out. Jessica Hagedorn has seamlessly adapted her novel into a play that is as rich and complex, distilling the Filipino colonial psyche and circumstance into a potent brew.

Set in Manila in 1982 a few years before the downfall of the Marcos regime, Dogeaters is funny, satirical, self-referential, irreverent and cloying for the right reasons. Hagedorn’s characters are facets of the Filipino–what the Filipino has become and what the Filipino could be. She uses them as lenses to magnify this notion for all to see. 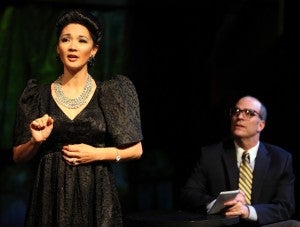 Underneath is a yearning and love for a forsaken motherland that is forever changing yet inherently the same as viewed through the eyes of Rio Gonzaga, a Filipino-American who returns after years of absence, who sees it all from a much clearer perspective, free from the blinders that limit the view of her fellow countrymen and women.

Hagedorn has created a vehicle for the audience to experience a particular vantage point of viewing the Philippines, in the details that make up the whole that is recognizable to many who have left the country. It reaffirms the varying reasons why one left in the first place and why, in spite of these reasons, one would always call it home.

Loretta Greco’s direction is spot on, with sensitivity to character and Philippine culture as if she herself has somehow experienced it firsthand. Taking Hagedorn’s play and highlighting its salient points with emphasis on its visceral qualities, Greco whips up an immersive theatrical experience, turning the space into a simulacrum of the Philippines that, on a meta level, places the audience in the theater as the audience of the various scenes in the play: a radio drama, a T.V. show, a movie theater, a beauty pageant, a film festival, a night club, a sex den, a torture chamber, sacrilege, and the beginnings of an uprising that led to a revolution. If you know (like I do) how it is (or was) to be in Philippine society, then the experience will be quite familiar; but if you don’t, you will have a glimpse of it as a revelation.

Notable performances from the ensemble cast bring to life Hagedorn’s complex characters. Rinabeth Apostol gives a natural and contemplative performance as Rio Gonzaga. Esperanza Catubig is convincing and brilliant as the TV and radio personality Barbara Villanueva. Melvign Badiola is versatile with his portrayal of Nestor Norales and Chiquiting Moreno. Carina Lastimosa Salazar shines with both charm and tragedy as the probinsyana Trinidad “Trini” Gamboa. 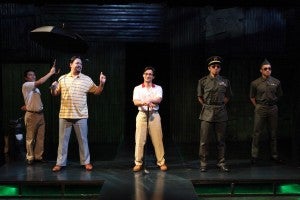 Jed Parsario is strongly present as Romeo Rosalez and a scene stealer in the role of Pedro. Christine Jamlig is vulnerable and with conviction as Daisy Avila. Rafael Jordan is compelling as Joey Sands. Charisse Loriaux is a riot as Lolita Luna. Mike Sagun is a convincing matinee idol as Tito Alvarez. Lawrence Radecker is believable as Rainer Fassbinder.

Julie Kuwabara scatters a dash of humor and contempt as Pucha Gonzaga. Chuck Lacson is believably traditional as Freddie Gonzaga. Ogie Zulueta is credible and powerful as Senator Domingo Avila. Beverly Sotelo is eerily charming and subtly deranged in her effective portrayal of Imelda Marcos.

Jomar Tagatac’s impressive acting prowess is showcased as he effortlessly moves from the understatedly vile General Nicasio Ledesma and the flamboyant Andres “Perlita” Alacran, playing each with equal intensity.

The slower pace of the second act of the play, overshadowed by the exuberance of the first act, is compensated by a change of tone: a more serious one, dictated by the consequence of the prior circumstances in the story and the development of characters, especially those unwilling victims who survived into act two, adding more dimensions to their personalities. 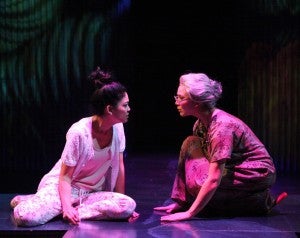 Poignant, revelatory, humorous and provocative, Dogeaters is a mirror decorated with fanfare and polished to a point that is reflective to convey a clear image yet retaining a tarnished quality that reminds those who look of the blemishes and scars that they either carry or have caused.

The true heroes are the underdogs, the misfits who struggle to survive between the cracks of society who, in spite of the challenges, are wont to act for the sake of change, for things that really matter, while those above revel and are lost in the pageantry of their own making.

Hagedorn sums up this truth through her character-cum-alter-ego Rio Gonzaga saying “Everything has changed but nothing is different…the soap opera of the Philippines continues.”