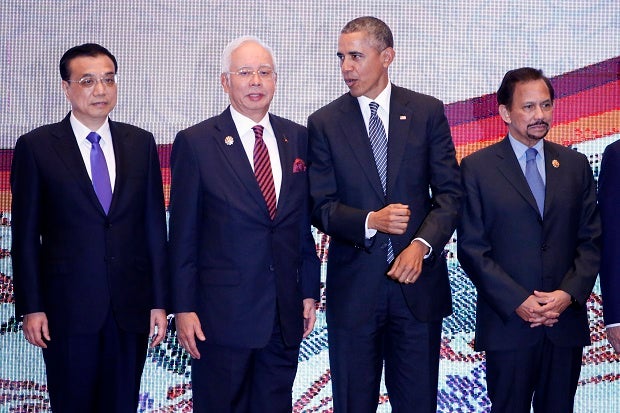 In this Nov. 22, 2015 file photo, U.S. President Barack Obama, second from right, speaks to Malaysian Prime Minister Najib Razak, second from left, flanked by Chinese Premier Li Keqiang, left, and Brunei’s Sultan Hassanal Bolkiah during the 10th East Asia Summit at the 27th ASEAN Summit in Kuala Lumpur, Malaysia. The Southeast Asian officials who will gather at a resort oasis in the California desert on Monday, Feb. 15, 2016, and Tuesday, Feb. 16, 2016, lead nations that span the political spectrum from communist dictatorships in Vietnam and Laos to an oil rich sultanate in Brunei and boisterous democracies in Indonesia and the Philippines. AP File Photo

RANCHO MIRAGE, California—US President Barack Obama and the 10 Southeast Asian leaders will likely issue a joint statement at the end of the special two-day summit to be held at a Californian desert here.

It will, however, not just touch on the disputes in the South China Sea, United States national security advisor Susan Rice said in a press conference here a few hours before the official start of the summit, the first ever standalone meeting between the US and the 10-nation regional bloc.

“We are continuing to work on with Asean (Association of Southeast Asian Nations) partners on the statement, but it won’t be focused primarily on the South China Sea,” Rice said.

“We issued statements in the past and we consistently underscored our shared commitment to peaceful resolution of disputes and freedom of commerce and navigation,” she said.

The United States has led freedom of navigation patrols in the South China Sea, challenging the sweeping territorial claims of China over almost its entirety.

Rice stressed that the US-Asean summit to be held at California’s desert Sunnylands Estate will be a historic one as it is the first ever held on American soil.

“This summit is truly a historic occasion. It is the first time we are hosting Asean leader here in the United States. If we succeeded in doing so reflects the return on seven years of significant and sustained investment by this administration in the Asia Pacific and in Southeast Asia,” she said.

The summit highlights the importance of the regional bloc for the US and casts light on the Obama’s US rebalance to Asia strategy, a shift of its focus from the Middle East to the Asia Pacific.

READ: Summit to highlight US power in SE Asia

Some quarters say that the summit signifies the US’ longtime courtship of the Asean as a regional bloc amidst the rising tension in the South China Sea and the upcoming change of leadership in the US. RAM