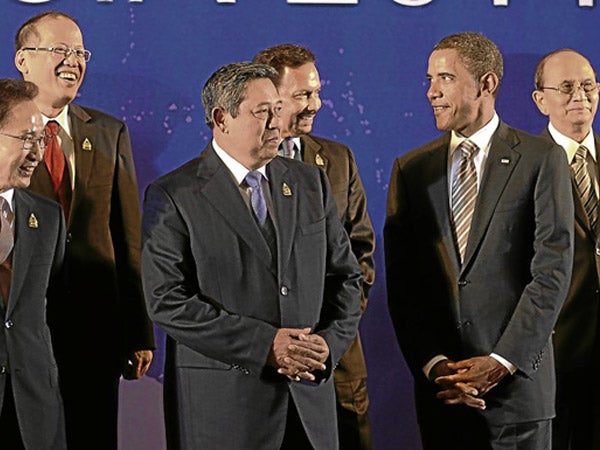 US President Barack Obama shares a light moment with President Aquino (left, background)  and other leaders of the Association of Southeast Asian Nations in this file photo during the 6th East Asia Summit at Bali International Convention Center in Indonesia. MALACAÑANG PHOTO

Obama welcomes representatives from 10 ASEAN countries to Sunnylands, a secluded 200 acre resort beloved by Frank Sinatra and US presidents since Dwight Eisenhower.

The visitors may have preferred the cachet of a White House visit and an Oval Office photo-op. But, like his predecessors, Obama is fond of the dry air, clean skies and the verdant fairways of this golfing Mecca.

Before sitting down at the summit table, Obama spent two days on the links.

The White House sees this summit and the prestigious venue as an opportunity to show ASEAN’s importance before Obama leaves office in January 2017.

They will have to try, however — perhaps in vain — to prevent the event from being overshadowed by the death of Supreme Court justice Antonin Scalia.

The leaders of Vietnam and Myanmar, facing their own domestic challenges, have dropped out, electing to send deputies instead.

The ASEAN bloc was once an afterthought in American policy — too small, too diverse and too dysfunctional to be an effective player.

But Obama — who spent a few of his formative years in Indonesia — has made it a fulcrum for his much-vaunted “pivot to Asia.”

“The 10 ASEAN nations together represent the world’s seventh largest economy. They are at the nexus of critical security issues, whether it’s maritime security, counterterrorism, or counter-piracy.”

Obama’s administration has tried to bind ASEAN more tightly together, in part to serve as a counterpoint to China, the region’s dominant power.

The White House has actively coaxed countries like Myanmar away from dictatorship, making the bloc more democratic and more likely to back global norms.

Obama is trying to “create a strategic context for getting China to play by the rules,” according to Earnest Bower of the Center for Strategic and International Studies.

America’s superpower rival and sometime partner will be a presence throughout the Sunnylands summit, both seen and unseen.

Leaders wondering among the palms and artichoke agaves will find a small red US-China “Friendship Bench” where Obama and President Xi Jinping sat for a “shirtsleeves summit” three years ago.

During this summit, Obama and his counterparts will try to agree on how to deal with a myriad of competing maritime claims in the strategically vital South China Sea.

Brunei, Malaysia, the Philippines and Vietnam — as well as China and Taiwan, who will not be represented at Sunnylands — all lay claim to an array of remote reefs, spits, atolls and shoals that have become geopolitical hotspots.

For decades there has been building and tinkering on the islets, but recent breakneck Chinese military construction has prompted fears of conflict.

Officials and diplomats say a major aim of Monday and Tuesday’s meetings is to agree on a response to a major UN panel ruling on the disputes that is expected within months.

The Permanent Court of Arbitration will decide whether China’s controversial territorial claim to a vast expanse of sea inside a “nine dash line” has any legal merit.

A collective US-ASEAN endorsement of the court’s verdict — whatever the outcome –would heap pressure on China, which refuses to recognize the panel.

The White House has tried, so far unsuccessfully, to cajole Beijing into stopping military work and committing to resolve any disputes by negotiation and following the rule of law.

Backers “hope that, if not immediately, then over time, the Chinese will not want to be isolated and an international pariah, a country that doesn’t agree with international law,” said Bower.

Behind the scenes diplomatic maneuvering is intense.

Beijing has fiercely lobbied ASEAN nations without a direct stake in territorial disputes, notably Cambodia and Laos, to water-down any common position.

Officials point to signs that China may be preparing to talk to Japan about disputes in the East China Sea in an effort to weaken pressure.