Summit to highlight US power in SE Asia 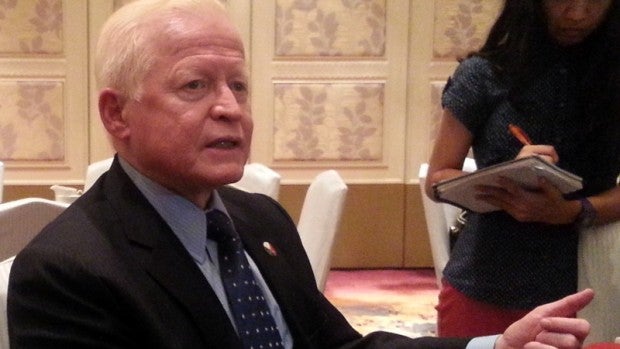 Philippine Ambassador to the US Jose Cuisia Jr.     INQUIRER.net/Matikas Santos

“It is our firm belief that the US must continue to play a key role in ensuring the regional security architecture for the 21st century. This summit reaffirms the commitment of the US to continue playing such a key role,” Cuisia said in an interview with RTVM.

The two-day summit, described as an informal gathering, also shows that Asean plays a central role in ensuring the region’s stability and prosperity, Cuisia said.

To be held at the historic Sunnylands estate, the first meeting between the United States and Asean as strategic partners will touch on maritime issues,   including the brewing tension due to territorial disputes in the South China Sea.

The Philippines, Vietnam, Brunei, Malaysia, and Taiwan have conflicting claims over the South China Sea, most of which is being claimed by China.

In remarks before he left Manila Monday for the California summit, President Aquino said the United States had become a “big contributor to maintaining peace, order and stability in our region, particularly in the face of the conflict over the South China Sea (West Philippine Sea).

“With our fellow Asean brothers, we are one with the US in pushing for the rule of law in our seas. This is clear to all: Everyone is equal before the law. Recognition of the right of every country is the foundation of closer and more productive relations, which bring confidence and substantial opportunities to our part of the world,” he said.

The Enhanced Defense Cooperation Agreement (Edca), recently upheld by the Supreme Court, also further strengthens the alliance between the two countries, he added.

Elizabeth Buensuceso, the Philippine’s ambassador to the Asean, said the Philippines wants a commitment from the United States that it would continue to help maintain peace, stability and security in the South China Sea.

The Philippines is also pushing for the inclusion of the rule of law principle in the final document to be issued at the end of the summit, Buensuceso said.

According to her, officials are currently working on the document that will contain a declaration of principles that will govern relations between the US and the Asean. What the document will be called is still under deliberation.

“The theme of that document must champion the rule of law. And of course, it will define Asean-US relations in the future as well,” Buensuceso said in an interview with RTVM.

Manila has challenged Beijing’s claim over the South China Sea in a case filed in the Permanent Court of Arbitration in The Hague, although China has refused to recognize this.

Another topic the Philippines will seek to discuss during the summit is countering violent extremism.

The Jakarta-based Buensuceso said the threat posed by the Islamic State group, an international terrorist organization, was already on Asean’s doorstep, which was why there was a need to increase cooperation to fight this kind of extremism.

Other issues of interest to the country are good governance, protection of women, children, and other vulnerable groups, and peace and reconciliation, she said.

The leaders are also expected to discuss trade, given the recent creation of the Asean economic community. Other issues that could be tackled are climate change, cyberterrorism and trafficking.

Buensuceso said the Asean-US summit was important to the Philippines for economic reasons. The United States is the largest investor in the Asean, and the fourth largest trading partner of the region.

The establishment of the Asean economic community last year, which is intended to create a single market and production base in the region, could open a lot of new avenues for business.

“We would like the United States of America, especially the investors, to take advantage of the many opportunities being offered by the Asean economic community,” she said.

Asean leaders are free to raise any topic of interest to them during the summit, Buensuceso said, adding that US President Barack Obama is encouraging free-flow discussions.

The 90-hectare Sunnylands estate, which features desert gardens and a collection of artworks, has hosted the rich and famous. Obama held an informal summit here with Chinese President Xi Jinping in 2013.

Sunnylands has also been known as the western counterpart of Camp David, the US leader’s retreat house.

The choice of Sunnylands as the venue for the Asean summit was “symbolic,” Buensuceso said.

“This signals that America considers the Asean to be almost in the same league as any major player in international relations,” Buensuceso said. “There are a lot of countries lining up to be partners of the Asean,” she said. With reports from Jeannette I. Andrade and Jerry E. Esplanada