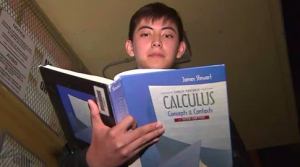 The Amazing Cedrick Argueta, One of only 12 acers of AP Calculus exam. REMEZCLA

LOS ANGELES — For earning a perfect score on his Advanced Placement Calculus exam, 17-year-old Cedrick Argueta, a Filipino Salvadoran American, was honored by Los Angeles’ board of education on Tuesday, February 9.

Argueta, the son of a Filipina nurse and a Salvadoran maintenance worker, is one of only 12 students in the world — out of the total 302,531 who took the exam — who achieved the perfect mark of 108.

“I’m glad that I’m able to do this, not just for my culture, but for all cultures so anybody can realize that anything is possible,” Argueta said.

Speaking before Los Angeles Unified School District (LAUSD) Board of Education and Superintendent Michelle King, Argueta acknowledged that it was a “team effort” to pass the exam and that he was “one small example” of the school district’s work.

Currently a senior at Abraham Lincoln High School, Argueta want to attend the California Institute of Technology and one day work for NASA’s Jet Propulsion Laboratory as an engineer.

“I want to be an engineer because I’ve always liked math and science, so going into that field makes sense for me,” he told the Asian Journal.

He credits his math teacher Anthony Yom, a Korean immigrant, with helping him excel in the subject. In preparing for the exam, Yom designated Argueta as a study leader and spent after-school hours and weekends making sure other students mastered the advanced concepts. Tuesday’s board meeting also recognized Yom and the high school’s principal Jose Torres.

In his remarks, Yom thanked students’ parents for making the commitment to drive their children to school on weekends so they could study for the exam, and community members for opening up their facilities when the school wasn’t open.

“I want everyone to remember that it still takes a village to raise a child,” Yom said.

Yom — whose AP students have all passed the calculus exam in the last three years — noted that he doesn’t have any special strategies when it comes to teaching. Rather, he treats his students as “friends” and gets to know them on a personal level to build trust.

“If you don’t think of [teaching] as work, then you produce a better result,” he said.

Torres cited Argueta as an example of “what can happen…if we all believe that every child who comes into a classroom can learn, regardless of their background or where they come from.”

Argueta’s mother, Lilian, who immigrated to the United States from Batangas, Philippines in 1992, remarked on how studious her son is.

“At school, they have an after-school program to prepare for the test. When he gets home, he studies hard too. He’s always been like that,” she said.

She beamed with pride seeing her son be recognized and receive a standing ovation by the school district’s board members.

“We’re all happy and proud of him,” she said. “He can be whatever he wants to be. We’re here to support him.”

Since finding out about his test score, Argueta has received worldwide attention, and even got President Barack Obama to tweet him: “Cedrick; way to go on your perfect score! How about you come by the next White House Science Fair?”

Getting a tweet “from the most influential and important man in the world” was an honor, Argueta said, and he is excited to take that trip to the White House.

In addition to his incredible achievement on the AP exam, Argueta also scored perfectly on the math and English sections of the ACT college-entrance exam.

Despite being a math wiz (his nickname at school is “One of Twelve”), Argueta asserts that he’s just a normal teenager who likes sports, video games and hanging out at the mall.

His advice for high school students? Take advantage of available resources and balance academics with other hobbies.

“I know everyone tells them to try hard and work hard, but really try to get all the help that they can get. There are a lot of great resources,” Argueta told the Asian Journal.

“Also, try not to make everything about academics. Balance your life out. Try to put your time in something that’s fun for you, rather than just putting it into academics.”