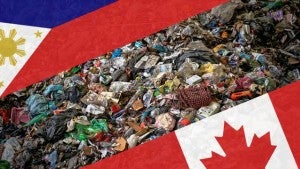 RED DEER, Alberta – As far as the Canadian ministry of environment is concerned, the buck stops with the Philippine government for the nearly 3-year-old problem of trash being shipped from Canada.

Environment and Climate Change Minister Catherine McKenna was not available for comment regarding a recent petition sent to Prime Minister Justin Trudeau on the matter. However, the ministry’s spokesperson gave a statement via email to INQUIRER.net.

Barbara Harvey, spokesperson for the ministry, reiterated that the wastes that ended up on Philippine shores were not illegal under Canadian rules.

“Since the contents of the shipment to the Philippines were materials collected from households, the shipment was not illegal under Canadian regulations,” she said.

Prime Minister Trudeau’s government also did not violate the international agreement that governs all shipments of hazardous waste, the Basel Convention, according to Harvey.

Going by the results of the tests conducted by the Philippines’ Environment Management Bureau showing that the materials shipped were neither hazardous nor toxic, Harvey said the exporters did not require a valid permit from Environment Canada to ship.

“Consistent with our obligations under the Basel Convention, Canada requires exporters of hazardous waste and hazardous recyclable materials to obtain a valid export permit from Environment Canada before they proceed with any international shipment of these materials,” she explained.

Harvey added: “However, an export permit is not required for the trans-boundary movement of waste or recyclable materials collected from households.”

Adopted in 1989 by 53 countries, the Basel Convention on the Control of Trans-boundary Movements of Hazardous Wastes and their Disposal is an international treaty that regulates shipments of hazardous wastes between countries. Both Canada and the Philippines are signatories to the treaty.

In March 2015, the Department of Environment and Natural Resources’ Environment Management Bureau declared the contents of the 103 container vans non-hazardous based on its Waste Analysis and Characteristics Study. Therefore the shipment did not violate Republic Act 6969 of 1990(Toxic Substance and Hazardous Wastes and Nuclear Wastes Control Act). Only 10 container vans were inspected by the bureau.

Bureau of Customs soon discovered they contained trash. A barrage of calls since then ensued from Philippine lobby groups and politicians for Canada to take back its trash.

Environmental groups in the Philippines maintain their stance regarding the wastes problem – for Canada to take responsibility and take back its trash.

Aileen Lucero, Coordinator for EcoWaste Coalition in an email said, “It is ironic that Ms. Harvey on behalf of Minister Catherine McKenna cites the Basel Convention, because Canada’s waste dumping in the Philippines actually violates the treaty.”

Lucero cited Article 4 paragraph 1c, of the treaty which states, “Parties shall prohibit or shall not permit the export of hazardous wastes and other wastes if the State of import does not consent in writing to the specific import.”

“Philippines never consented to the import of even one waste container let alone 103 of them and the treaty covers both hazardous wastes and other wastes,” she said.

She added, “Canada claims that its law does not cover household waste but that just means that government is ignoring its treaty obligations, which covers these wastes. Ignorance of the law excuses no one.”

Kalikasan People’s Network for the Environment said it would be willing to invite independent environmental groups from Canada to conduct tests to prove that the waste contents were hazardous. “It is the same condonation that the Aquino government gives to violators of our environmental laws such foreign corporations,” it said, citing Canadian-Australian mining firm OceanaGold that is being accused of water contamination in Nueva Vizcaya.

Ecowaste Coalition is also calling on the Canadian government to pay the storage fees for the stranded container vans in Manila Ports, and to fix legal loopholes that led to the unlawful export of the garbage to the Philippines.

The coalition gathered some 1,300 signatures contained in a recent petition urging the Trudeau government to put an end to the waste problem.

Canada also violated the pact for failing to punish exporter Chronic Inc., and not addressing the dumping issue within 30 days as required by the pact, said Lucero.

Lucero suggested that capacity building might help the Canadian government understand its obligations under the Basel Convention.

But even without the international agreement, Lucero’s group hoped that “common Canadian decency would address the matter by immediate return of the waste to Canada and fixing the failed policies that allowed it to happen in the first place.”

“With the enormous financial and technical resources at its command, Canada should have no problem managing its used diapers, electronic junks, plastic scraps and other wastes in its own soil instead of shipping them to our shores for disposal,” she added.

Meanwhile, local government units in the Philippines have refused use of their landfills to dispose the garbage contents of the 103 container vans after 26 container vans had been emptied into a landfill in Capas, in Tarlac province in July last year.

When the local government opposed the move, another landfill was eyed in Bulacan province, but this was also blocked. In a September ordinance, Navotas City also opposed the dumping of the foreign trash into its dumpsites.

Other critics have accused the Aquino administration of not seriously dealing with the Canadian trash controversy.

Read Next
Hagedorn’s stage version of ‘Dogeaters’ opens in San Francisco
EDITORS' PICK
Cebu City closes its borders
IATF: Food firms to operate with 50% of workforce during Luzon quarantine
Style and music journeys with Claudia Barretto
UP-PGH wards for COVID-19 patients finished in 5 days
DILG to stranded workers: ‘Stay where you are’ until Luzon-wide quarantine is over
BREAKING: 1,075 people in PH has coronavirus disease – DOH
MOST READ
Pacquiao to seek probe on leaked private letter from Barangay Dasmariñas
No more bread? Company forced to limit production
BREAKING: 1,075 people in PH has coronavirus disease – DOH
Locsin blasts DOH for blocking entry of Chinese doctors
Don't miss out on the latest news and information.